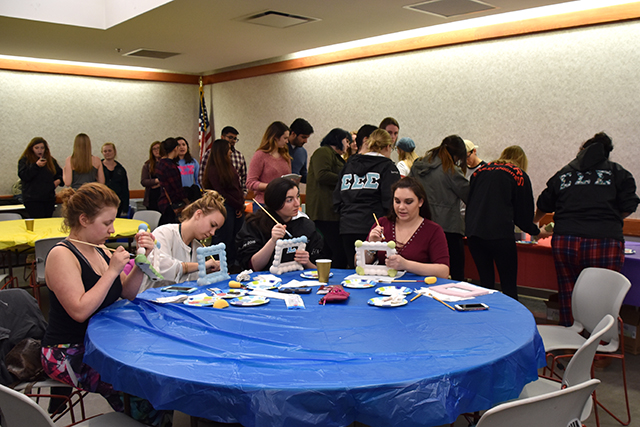 A “pottery night” was held in Friends Hall last Saturday night as the College Programming Board gave students ceramic picture frames to paint. According to sophomore and CPB member Dan Sakumoto, the CPB spent at least $1,000 on the frames, which came in a variety of shapes. Some were circular, featuring a “bubbly” pattern while others were plain and square. The circular frame appeared to be the favorite among attendees, who picked frames offered by CPB hosts before being invited to sit down and paint as many ceramic frames as they would like.

A CPB member instructed students to dab their frames with sponges before painting. Attendees obliged, and then proceeded to paint away with an assortment of bright colors. The students would pick out the colors they wanted to use and pour them from a plastic tube of paint onto a plastic plate. Afterwards they were asked to grab a few brushes and get to work.

Everyone looked very happy while painting their frames. Some CPB members made use of the Friends Hall sound system, playing music so that the students could listen to pop hits while they painted.

Junior Anthony Piombino and senior Jamie Prizer were initially disappointed in the event, believing it to be a pottery class rather than a painting event.  “I expected to work more with clayish pottery, like building vases on the clay wheel,” said Piombino. However, despite their initial disappointment, the two students enjoyed the night and said they would recommend future pottery nights to their friends.