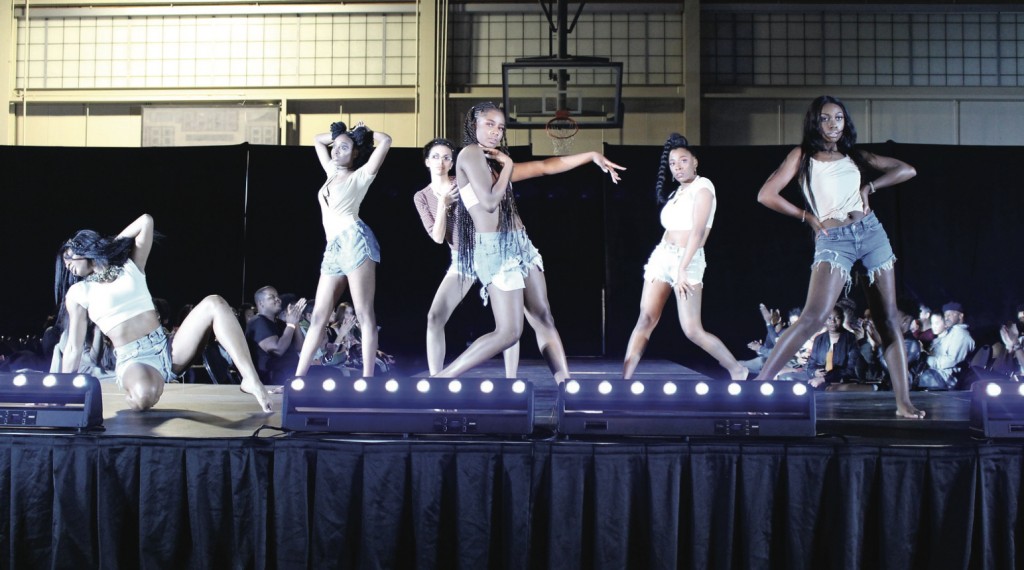 The annual Ramapo College Fashion Show took place last Friday night, as the show’s organizers embraced the theme of “Coming to America,” featuring garments inspired by African culture and traditional attire. The event, which occurred the night of the NJAC men’s basketball championship between the College and New Jersey City University, still drew a crowd to the Bradley Center’s auxiliary gym.

Sophomore Hannah McCoy unexpectedly took the stage, assuming hosting duties due to the late arrival of “Love & Hip Hop: New York” star Yandy Smith, who shared the microphone with McCoy upon Smith’s arrival. DJ Nix In The Mix served as the night’s primary DJ, while Smith’s castmate DJ Drewski was also in attendance.

The show dedicated time to the remembrance of Jason Mejia, a Ramapo student who committed suicide this past year. Mejia was a Visual Arts major who was actively involved with the annual fashion show at Ramapo. Prior to the opening of the show, McCoy shared a few words before holding a moment of silence for Meija.

While Meija’s absence was clearly felt, many fashion show organizers were proud of the their production. Shaleah Peyton, a senior who acted as a model, dancer and coordinator of the show, believes “Coming to America” is one of the best Ramapo College fashion shows to date.

“I am most proud of the performers, the choice of designers, and we have really amazing choreographers,” said Peyton.

Peyton said pulling off such a large-scale event takes hard work and preparation.

“We practiced three times a week for more than six weeks. We had to get choreography together,” she said, “it takes a lot of preparation from the time before, to the day of.”

It was clear the choice of designers played a big part in the success of the fashion show. When asked about his favorite parts of the show, junior Isaiah Johnson gave his input:

“The designs and the models… you need to support the designers who worked really hard.”

Johnson cited his admiration of the arts as his reason for attending the show rather than the basketball championship.

Other than fashion, the event showcased the various other talents present here at Ramapo. There were musical performances by sophomore Jihad Peele, known as 2Reel, and former Ramapo College student Jerome Daniels, known as Godmade. Both artists performed their songs as their merchandise was modeled in the background.

In between the runway portions of the show were sequenced dance routines. Senior Ramapo College student Tiffany Phillips-Maxwell, who also acted as a model in the show, choreographed these routines.

The event concluded with a selection of spoken-word poetry written and performed by Bianca Arielle. Arielle, a graduate of the College and close friend of Mejia, spoke on their friendship and other topics including police brutality and the United States’ current political climate. The show ended with an after party in Friends Hall, hosted by DJ Nix In The Mix.