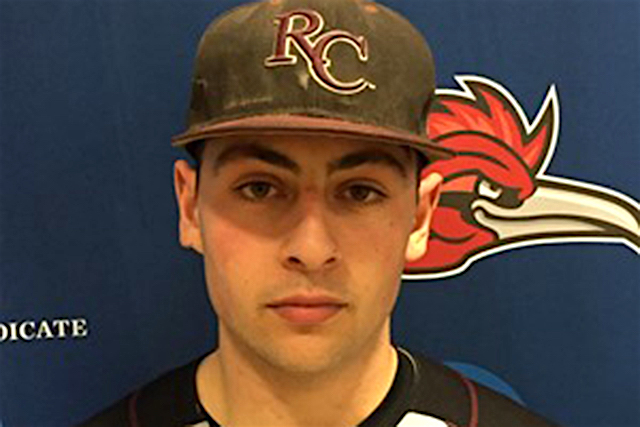 Ryan Rinsky, a 2016 graduate of Ramapo College and a four-year starter on the baseball team, signed a professional baseball contract earlier this month with the Florence Freedom in Florence, KY. The team is an independent team, meaning it has no affiliation with Major League Baseball, and is a member of the Frontier League.

The 5’10” catcher was lethal when he was behind the plate for Ramapo and a base-stealer’s worst nightmare. In his four years at the school he threw out 66 of 126 possible base-stealers which is an unbelievable 52 percent. To put this into perspective, according to baseballrefrenace.com, Yadier Molina of the St. Louis Cardinals and arguably the best active catcher in the MLB has a career caught stealing percentage of 41.69. On top of the amazing caught stealing percentage Rinsky also held a career fielding percentage of .978.

However, with this much success as a baseball player, a tough work ethic is a necessity. “I have always dreamed of playing pro baseball, so once I got to college I really dedicated myself on the field and in the weight room to become the best player that I can be,” said Rinksy. Rinsky’s talents were seen when he decided to go west this winter and play in the California Winter League. “I decided to go to the California Winter League after talking with a couple of people that played in it because they said it was great exposure and I couldn’t be happier that I chose to go out there,” said Rinsky.

It’s not a surprise that Ramapo College baseball has been having incredibly successful seasons in recent years, which is indicated by many former players signing with professional sports teams. Former Roadrunner Eli Garcia also signed with Florence Freedom. Joe Venturino, Rinsky and Garcia’s old teammate, was selected by the Seattle Mariners in the 36th round of the 2016 MLB draft as one of 20 DIII players selected. PJ Cerreto, also a former Ramapo College baseball player, was selected by the Cincinnati Reds in 2013.

Unlike the MLB season that starts in April, The Frontier League starts the first week in May. This will allow Rinksy to refuel after a gruesome winter league schedule where he was playing five or six games a week for a little over a month. It will also allow him to get all the extra work in that he needs to be at the top of his game come this May. “Coach Martin and the rest of the Ramapo baseball coaching staff have been nice enough to welcome me back and work with me to help me stay in shape for the season,” said Rinsky.

For Rinsky, nothing will be handed to him when he steps foot in Florence. When he reports for Spring Training he will be one of three catchers that will battle it out for the starting job. “After talking to my manager, he and I are both happy with where my defense is right now. I have been trying to hit as much as possible while I am home to give myself the best chance that I can to win the job,” said Rinsky. “Once I get out there for Spring Training I just have to stay within myself and play the way I play because I am confident that I can help the team win games,” said Rinsky.

With the confidence that Rinsky has the sky is really the limit for him. He has the natural talent and the work ethic that it takes to become a successful baseball player at whatever level he plays at. “I couldn't be more excited to get out to Kentucky, get to work with the team and experience what pro ball is really like,” said Rinsky.