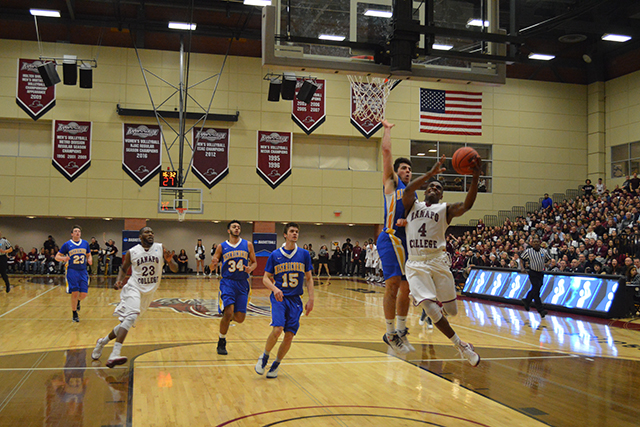 Ramapo hosted the first and second rounds of the 2017 NCAA Division III Men’s Basketball Championship this past weekend. The first matchup was between Keene State College and Amherst College. Keene State won the game on a three-point shot made by Ty Nichols as time expired.

After the conclusion of the first game the spotlight was set for the prime time game that featured the Misericordia University Cougars and the Ramapo College Roadrunners. The game had a sellout crowd with nearly 1500 fans in attendance. “The crowd was great and really got behind us. They gave us all the momentum that we needed to come out and play well,” said Ramapo guard James Long.

Ramapo’s shooting guard, Josh Ford, came out hot to start off the game. He scored the first eight points for Ramapo and finished with a game high 20 points for the Roadrunners. “I knew I had to come out with the mindset of being aggressive. Coach told me he needed me to step up more because of some of the injuries we had so that’s what I tried to do,” said Ford.

However, Misericordia played almost flawlessly for the first 20 minutes of the game. They held a seven point lead going into the break. The Cougars were led by Tre Fields and Tony Harding, who both had eight points in the first half.

The Roadrunners were a different team when the second half came around. They scored 47 points and outscored the Cougars by 17. Alongside Ford, freshman Pat Peterson really stepped up big off the bench in the second half. He scored 13 in the half including a personal 6-0 run that went on to be the turning point in the game. “Coach got into me a bit and really fired me up. I didn’t want to let my teammates down, I knew I had more in me so I had to step up,” said Peterson.

Ramapo took a 46-44 lead with 11:07 left in the game after Ford’s fast break layup. Just like so many times this season once the Roadrunners gained a lead in the second half, they never looked back. They held that lead for the final 11 minutes en route to a 10 point victory in the first round of the NCAA tournament.

Unfortunately, Ramapo’s season came to a crushing end on Saturday night at the hands of Ty Nichols and the Keene State Owls. The Owls Sophomore Forward had a season high 32 points and led the Owls to a 92-91 overtime victory. They will take on #2 ranked Christopher Newport on Friday March 10, in Babson Park, MA.

As for the Roadrunners, there are a lot of positives that were taken away from this season. They finished the season with a 26-3 record and were ranked as high as #5 in the country out of the 416 Division III basketball teams. They will be returning 77 percent of their offensive production come next season. That is saying a lot for a team that was top 30 in the country in points per game with 85.3 per game. The Roadrunners are a close knit team that did not focus on personal stats, only winning. That competitive drive is what has contributed to their success on the court.

“I am most excited to compete with my brothers again. I am disappointed about how our season ended this year but this will only make my teammates and I hungrier come next year,” said Peterson.

Ramapo will have to come out even stronger next year and not be content with their past success.

They will enter next season with a target on their backs when they take the floor next November. “We showed we are a team to be reckoned with nationally this year, next year we have unfinished business,” said Long.