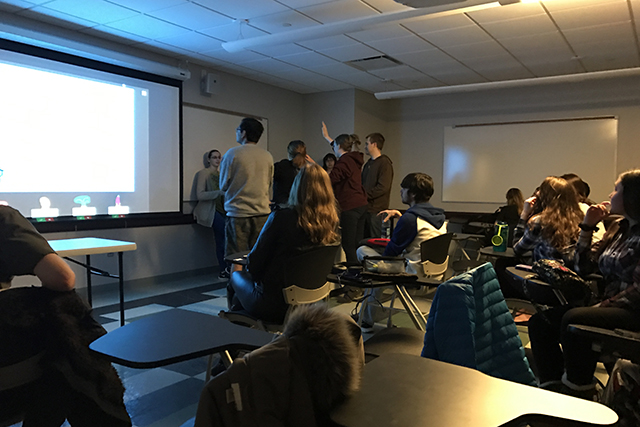 As co-hosts of Ramapo College’s Geek Week – a seven-day-long series of “nerdy” events held by several on-campus clubs – the school’s Harry Potter club, Dumbledore’s Army, hosted Ultimate Nerdy Trivia last Tuesday night. The game’s format resembled that of popular television quiz show Jeopardy!, as each team took turns selecting questions worth 100, 200, 300, 400 or 500 points in any of the multiple categories. Each category represented a different nerdy fandom: Harry Potter, Disney, Star Wars, anime, Pokémon or Game of Thrones. The more points a question was worth, the greater degree of difficulty it held. If a team stated the wrong answer, that team would lose the points and the next team to go would have the opportunity to steal these points. Teams could also pass on questions, hence not penalizing their overall score, but the other teams still would have the opportunity to steal.

Members of Dumbledore’s Army were responsible for creating the questions and running the game throughout the evening.

“Yeah, I didn’t even know half the answers,” added junior and vice president of Dumbledore’s Army Katherine Strang.

To start things off, the participants separated themselves into teams according to which Harry Potter Hogwarts House – Gryffindor, Ravenclaw, Hufflepuff or Slytherin – they identified themselves as. The competition brought out both amiable amusement and ambitious aggravation among team members. Each question invoked fierce debate and deliberation within groups. Gryffindor took an early lead, and though the other teams battled to catch up, Gryffindor did not relinquish their first place seat. They swept the Game of Thrones category and were successful in answering all the questions presented to them. By the end of the game, Gryffindor had a hefty lead over the rest of the teams, but still stood to lose it with the final question. Much like Jeopardy! teams could wager the points they had, and would either lose or gain what they risked depending on if they could answer the question correctly. The final question was Harry Potter-themed, which filled all the other teams with the hope of a comeback. To everyone else’s but Gryffindor’s dismay, though, all the teams answered the question correctly. Since Gryffindor already was ahead, they remained in first place. The final tally held Slytherin in last place with 2600, Hufflepuff in third with 2900, Ravenclaw in second with 3300 and Gryffindor in first 4100. Thus, much like in the Harry Potter series, Gryffindor was victorious.

Though the competition did not deliver a prize, the team members of Gryffindor felt that bragging rights sufficed. The team reveled in their victory, proud of their performance and in their ability to defeat their opponents.

“Winning feels so good. We have stolen the competition. The Lanisters send their regards,” said senior Cassie Kronenfeld.

“Think of the best moment of your life and then multiply it by ten thousand – you’ll never know the joy I feel,” added freshman David Francis Vaughan.

Freshman Dylan Tapp simply commented, “To the king in the north.”