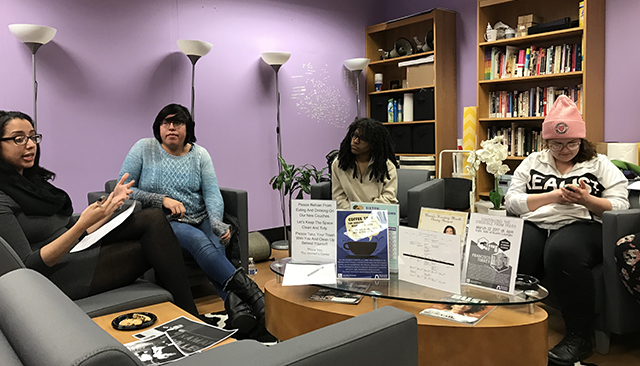 Throughout the month, the Women’s Center has hosted events for Women’s History Month and this past Wednesday, the center paid homage to its founders by hosting Coffee Talk: The Herstory of Women’s Center.

Junior and Student Women’s Outreach Coordinator Berly Rivera led the conversation. She first acknowledged Lynne Farrow’s contributions to the Women’s Center. Farrow was a Ramapo professor who began teaching at the College in 1972 and was the first professor at Ramapo to teach “Women in Contemporary Society.” Over time, Farrow gathered resources to provide women in her class with and eventually she had an entire cabinet filled with information for her students and other members of the college. Even this proved to be insufficient compared to the demand for resources these young women needed. Farrow therefore decided to establish a safe space: the Women’s Center.

The Women’s Center was officially established in 1974. At the time, it was located in the Human Environment school as opposed to its current location next to the Fish Bowl. Its first director, Lee Sennish, was also hired in 1974.

The center’s early years were dedicated to aiding women with sexual harassment and domestic violence. It has since progressed to an environment also devoted to advocacy and, especially in recent years, intersectionality.

After Rivera finished informing attendees about how the Women’s Center came to be, she opened the floor up for discussion about what the center has done and what it means to the school and its students.

“In high school my exposure to feminism was very Tumblr – like just very girl power,” Maria Martinez, sophomore, reflected. “When I got [to Ramapo] I just realized how many issues there were.”

Rivera added how she, too, was exposed to what feminism truly was the first time she went to the Women’s Center.

“I remember having this ‘Aha!’ moment where I realized what feminism was,” Rivera said, “like my feminist awakening.”

Members of the coffee talk also discussed how Ramapo is fortunate to have the Women’s Center, as many schools lack such a space. Similar to Farrow, the participants saw how fundamental it is for the college to have a designated area and organization.

“I think it’s important to have a specific office space,” said Martinez. “It gives your arguments more weight.”

The discussion then focused on the importance of the Women’s Center and its impact on the campus.

“I feel like if the Women’s Center wasn't here there would be a loss of education” Michele O’Besso, freshman, stated.

“I’m sure a lot of people here don’t realize how much the Women’s Center has an impact on the campus,” added junior Domenica Larocco.

The Women’s Center is a major resource for Ramapo students. For years, it has provided information and support to those battling inequality and injustice and has given students a safe haven. Rivera stressed that, unlike normal clubs or organizations, it is legitimately the Women’s Center’s job to act in the students’ best interest and help.

“Our purpose here is to advocate for stuff,” Rivera stated, continuing. “It’s our job to care. We exist to care.”

Intersectionality has been a major theme in this Women’s History Month. Rivera discussed that intersectionality is vital to feminism because for women to be equal to men, females have to raise each other up and see themselves as equal. Members of the coffee talk felt that this is why the Women’s Center will always be a necessity.