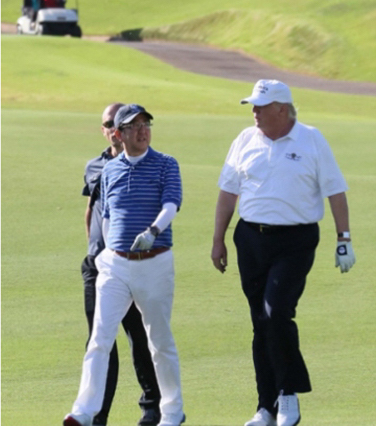 Baseball might be America’s favorite pastime, but golf seems to hold that spot in the hearts of American presidents, both past and present. For example, rewind 64 years to the presidency of Dwight D. Eisenhower. According to politifact.com, the 34th president played nearly 800 rounds of golf during his eight-year presidency.

Compared to the approximate 300 rounds of golf played by 44th president Barack Obama, our most recent presidents seem to be taking less vacation days than the leaders of our past. That’s where Donald Trump comes into play, quite literally.

President Trump has played 10 rounds of golf in his first two months as President, according to CNN. 10 is not a particularly huge number, but when CNN also states that five of the last seven weekends have been spent by Trump in Florida at his self-owned golf courses, the situation becomes a little more intriguing.

President Trump has been speaking out against Obama’s frequent golf outings for years, mostly through a series of angry tweets.

Once in 2014, Trump claimed through Twitter that Obama was “worse than Carter,” tweeting “Can you believe that with all of the problems and difficulties facing the US, President Obama spent the day playing golf.”

With a plethora of statements like these from the now-president, it’s understandable as to why news outlets are now turning Trump’s multiple golf trips into headline news. The difference between Trump’s words and actions in this instance paints a hypocritical portrait of the 45th president, one that should not be ignored.

Trump’s lackluster attitude towards the very thing he so harshly criticized his predecessor for doing should not distract the nation so much so that we begin ignoring actual news. If we are going to analyze Trump’s apparent favorite sport, we should be doing so in a way that focuses more on the country’s issues that he is neglecting while playing golf rather than how many times he’s visiting his resorts.

For example, take a look at Flint, Michigan. Yes, the Environmental Protection Agency did just grant the city $100 million dollars to help aid its people in finally getting clean, safe drinking water, but they are not there yet. Something suggests the people living in this area might be a little more concerned that their children cannot go near a faucet rather than which resort Trump and his golf clubs are currently visiting.

It is important to see that our president is spending just as much time on golf courses as he is in the oval office. Everyone needs a break from work, but a serious flaw in character is shown when leisure time is equivalent to or more important than work that needs to be done.

If we as the media continue to document Trump’s golf trips as a celebrity outing rather than a president ignoring his duties, we are also ignoring the larger issues at hand.

There are real issues happening throughout this nation and our president’s fixation with playing golf is slowly proving to be one of them. If the leader of our country is not going to make solving these problems his priority, maybe we, as citizens and media, should.