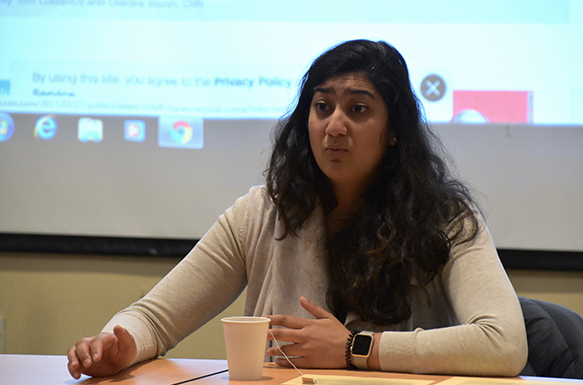 When Pallavi Reddy was 10 years old, she knew she wanted to be a journalist. However, she had no idea she would end up covering one of the most divisive presidential elections. As a CNN producer, Reddy traveled the country following Hillary Clinton and Donald Trump. Current Ramapo professor Rebecca Leung previously taught Reddy as a graduate journalism student at Columbia University. Ramapo College welcomed Reddy on Tuesday for an open forum with Ramapo’s journalism students.

“I never thought of myself as a political reporter or someone who wanted to cover politics,” said Reddy. “I’m a little politically apathetic, and it’s probably grown more so in terms of game playing and all the political rhetoric that I’ve heard from living in D.C. That being said, my apathy doesn’t come without actually caring how everyday Americans are affected by politics.”

During the forum, Reddy made it clear that while she is a strong supporter of the First Amendment, she also finds truth a very important principle.

“Me personally,” said Reddy, “I think they’re all crazy and do crazy things. I just want to hold them accountable for the things they say because there are millions of people that they represent.”

She started working with CNN on weekend political shows before moving over to work with John King on the “magic wall,” a segment that analyzes the Electoral College system. Most recently, she covered the 2016 election.

“I spent the 18 months prior to election day traveling around the country, mostly covering Hillary Clinton with CNN’s senior political correspondent, Brianna Keilar,” she said, adding that she also covered Bernie Sanders and Donald Trump.

Her first day on the job took place at a Hillary Clinton event in Manchester, New Hampshire.

“To be quite honest, I don’t really remember the event because I was scared the whole time I was going to mess it up,” Reddy said. “The campaign press corps was invited to have an off-the-record meeting with the candidate herself, Hillary Clinton. And it was kind of surreal to see her sitting across the table and have the opportunity to ask her literally anything. Apparently, she really likes wine – and hot sauce, loves her hot sauce.”

Reddy went on to explain how she used interactions such as that and Clinton’s speeches to find stories to write about.

“It’s a customary thing that candidates and presidents and politicians do where you’re able to kind of get some insight and maybe even some story ideas by the holes that they’re leaving in their answers, that candidates or their campaign aides leave an answer,” she said.

For Clinton, Reddy found those holes in her work with the Children’s Defense Fund, noting that Clinton would mention it but not go into detail.

“Then the next day, we were asked to stay on instead of going onto wherever Clinton was going and cover Donald Trump, and that was my first interaction with our now President Donald Trump,” she said.

She explained that both candidates had come to New Hampshire to try and pull swing voters.

“What I learned that day and what’s really stuck with me is Donald Trump really didn’t have to sell a lot. Meaning, the people there already came in, and this was October 2015, already came in with Make America Great Again hats,” she said. “They were all for it and fiercely so. There were very few undecideds in that room; there were a lot of people who wanted him to become our president.”

Despite the initial wow factor of her job, there were also downsides. She spent 170 nights in hotels in 2016, spending more time with her coworkers than with her parents and boyfriend. She also encountered experiences that made her fear for her life.

“I was on the battleship in Charleston when Trump announced the Muslim ban,” she said. “On that day, it was probably the first time that reporters were scared for their safety because the crowd had very much turned on the media and that’s kind of continued on.”

However, Reddy explained that Donald Trump was not the only one who turned his supporters against the media. She recalled being booed at a Sanders rally and said Barack Obama himself seemed “skittish” of the press and refused to do many interviews.

Regardless, Reddy said that she was committed to reporting the facts.

Reddy explained that most days she and Keilar would receive what the CNN executives thought were the most important continuing or developing stories. It was Reddy’s job to simultaneously fact check all of the information they were planning on broadcasting, a principle that is very important to her.