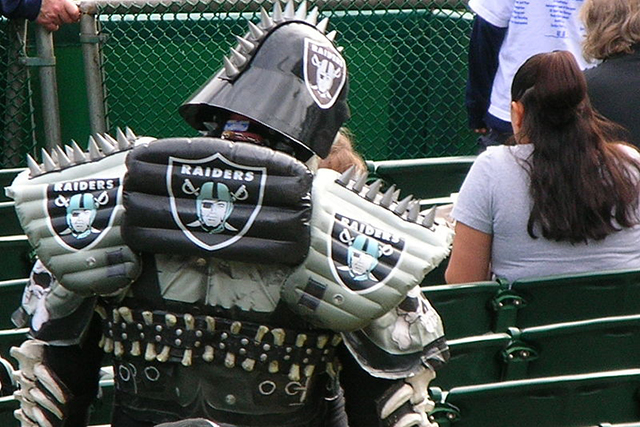 The Oakland Raiders are one of the most storied franchises in all of professional football. They’re the “just win baby” franchise, “the old silver and black” and a product of the late, great Al Davis. From the days of John Madden even until today with Derek Carr representing the franchise, the Oakland Raiders have always been one of the most entertaining franchises in all of football. There is a huge difference between going to any old football game and going to a Raiders game.

The average ticket to a Raiders game is about $200, a steep price to pay, but for $200 you’re paying for an NFL experience like no other. If you’re not from Oakland and you’re attending a Raiders game, you would think it’s Halloween as there is no such thing as a casual Raiders fan. Every fan who walks into that arena is a “super-fan” who’s fully decked out with more Oakland Raiders regalia than you ever knew existed. Raiders fans go far beyond the jersey and the hat; they have Raiders face paint, Raiders jewelry and probably even their lucky Raiders underwear.

Aside from the game day attire, Raiders fans exhibit more attributes that make them the best fans in all of football. Raiders fans have been through it all. They’ve suffered through “the immaculate reception,” the tuck rule, two relocations (and now a third) and even having Jamarcus Russel start at quarterback. But no matter what, Raiders fans have always come back to their beloved silver and black louder and prouder than ever. In a book entitled “Better to Reign in Hell: Inside the Oakland Raiders Fan Empire” written by Jim Miller and Kelly Mayhew, Miller refers to the Raiders as an “emotional life preserver” in Oakland. “Raider mania is stoked by the widespread socioeconomic decline that has plagued Oakland, where the poverty rate hovers around 25 percent…Membership in Raider Nation provides ‘an emotional life preserver’ in an otherwise bleak existence. A fan might think, my city might be blown up by terrorists, my job may be eliminated…my kids' future might be in jeopardy, but at least there's the Raiders."

Within their deteriorating environment in Oakland, the Raiders have been what has kept this loyal city holding on. Former Raiders tackle Mo Collins told the Oakland tribune, “Our fans are unique. They follow us around. They go to hostile environments." His teammate, Hall of Fame wide receiver Tim Brown added, "Whoever is there, we know we are going to get their best."

Aside from the Raiders leaving their loyal “Raider Nation” behind in Oakland, they’re also leaving behind one of the largest football markets. According to the station index, the Oakland-San Francisco-San Jose television market is the sixth largest television market in America with over 10.5 million television households. Comparatively, they’ll be going to what will be considered the NFL’s fifth smallest media market in Las Vegas, where according to NBC Sports, there are only 719,000 television households.

Raiders owner Mark Davis is abandoning some of football’s greatest fans in “Raider Nation,” moving to an astronomically smaller media market and placing every distraction in the world in front of the players. Al Davis, Mark Davis’s father, will go down in history as the creator to one of the greatest organizations in the NFL, but this move to Vegas puts the Raiders’ legend and his legacy to shame.