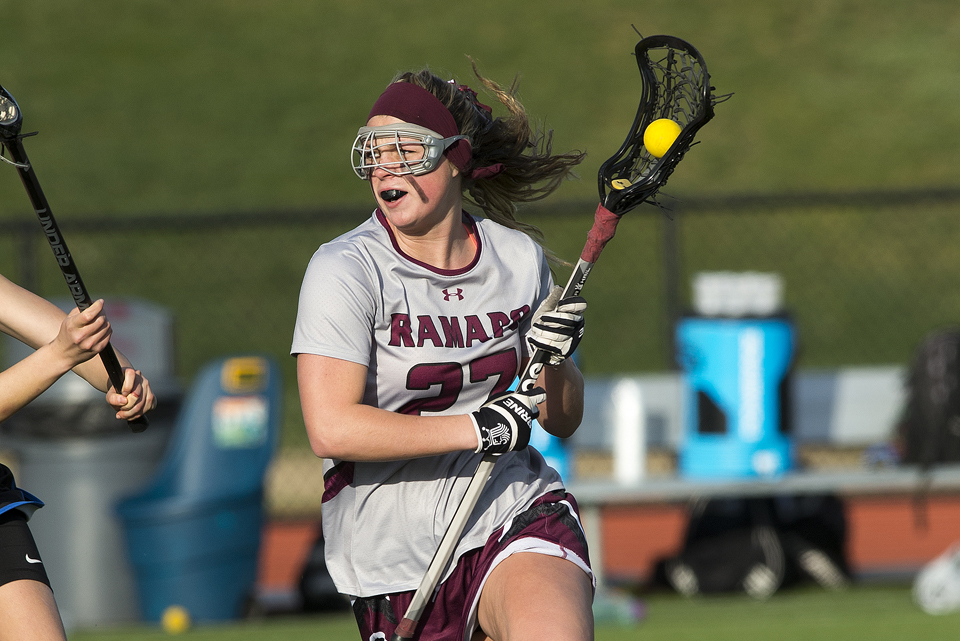 The Ramapo College women’s lacrosse team improved to 5-3 this season after their 10-7 victory over the United States Merchant Marine Academy on Tuesday. After the non-conference defeat, the Mariners fall to 2-2 overall.

Although the playing conditions were less than ideal, the Lady Roadrunners made the best of the situation, persevered and came out on top.

“Although the rain wasn’t ideal and we couldn’t feel our fingers or toes by halftime, we really pulled ourselves together to get the win,” said junior goalie Monica Bubello.

“Whatever’s happening out there with the weather – it’s affecting both teams. It’s all up here, it’s mental,” said Head Coach Jane Koeniges in her pregame speech to the team.

The weather did affect both teams equally, and it definitely showed in the first half as the Roadrunners and Mariners each came away with six goals. Although USMA took the lead in the first with three goals in just over six minutes, Ramapo’s defense only let up one goal in the second and netted four of their own.

Junior Colleen Manley scored the first goal of the game for the Roadrunners. Freshman Ava Rinaldi added one not long after on a free position shot to come within one. Rinaldi led the team in goals scored with three, making it her 11th of the season. The Mariners fired back to make the score 4-2, however Manley quickly answered with her 20th goal of the season to come within one, yet again, 18 minutes into the half.

Both teams would go back and forth to end the first half in a 6-6 tie. Freshman Nicole Jaskot and Rinaldi each posted one on two more free position shots while sophomore Gabi Davidson added one of her own.

Juniors Brianna Himpele, Marissa Cooney and Alyssa Tachon each sored a goal in the second half. Tachon leads the team in goals scored overall with 23. Rinaldi also scored her third of the game. The Roadrunners’ defense held the Mariners to only one goal in the second, which came with just under nine minutes left on the clock.

The Roadrunners held a 32-15 advantage in shots in the game, a statistic that would make it hard to tell that they were down by three in the first, and then held tightly at a 6-6 tie.

“At first we were down, but our team collectively decided that we wanted it more than they did, and we got the 10-7 win,” said Bubello. Bubello recorded five saves for Ramapo and earned the win.

The Roadrunners will be back in action this Sunday when they face Fairleigh Dickinson University-Florham for an away game at 1 p.m.