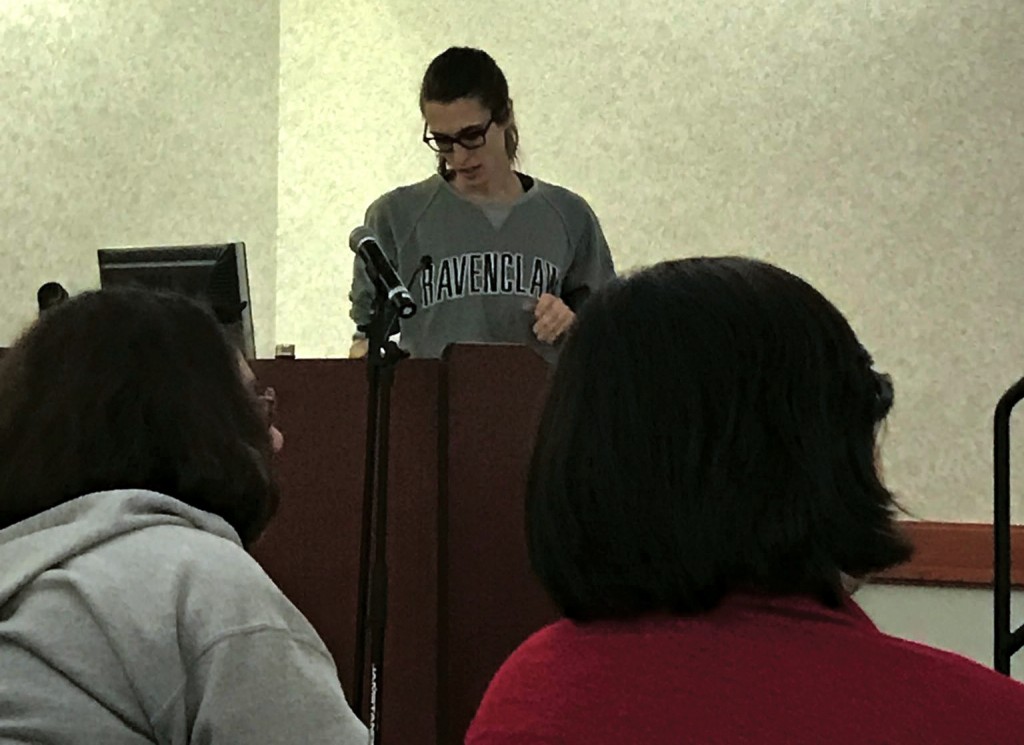 Rape culture, or the normalization of sexual assault, has been a hot topic in recent years on the campuses of the nation's colleges, many of which have been criticized for playing down sexual assault cases. On Tuesday, YouTuber Riley J. Dennis came to Ramapo to discuss rape culture and how everyone can make colleges safer.

According to Dennis’s website, she is an “intersectional feminist” who “identifies as a gay, trans, non-binary woman.” Dennis was previously the editor-in-chief of her college’s newspaper, which she utilized to promote awareness and action regarding sexual misconduct and violence. She has continued her advocacy, using her YouTube channel with over 26,500 subscribers to bring attention to injustice and encourage equality.

The central focus of Dennis’s presentation was rape culture. She first began by explaining what rape culture is, defining it as “a culture in which rape is normalized, excused or ignored to a high degree of many people particularly those in positions of power.” This acceptance of rape cultivates through seven pillars, according to Dennis.

The first pillar is a lack of education. Dennis believes that learning and understanding the basic premises of consent are essential in preventing rape, and that this education should be integrated into school systems from elementary school through college.

The next pillar of rape culture that Dennis explained is victim blaming. Victim blaming refers to a person’s insistence on excusing a perpetrator by somehow incriminating the victim.

“When more sympathy is given to the rapist than the survivor, you know there’s a problem,” Dennis stated.

She then continued on to explain that the third pillar of rape culture is not believing survivors.

“The difficult thing about rape as a crime is that it often happens behind closed doors,” Dennis said.

She went on stating that while people can lie about being raped, the number of cases that are based on the truth substantially outweighs those of falsehoods.

The fourth pillar of rape culture is gender roles. The idea that women have to be submissive while men need to prove their masculinity is at the basis of it. It causes men to feel entitled to sex, but also causes them to not step forward when raped themselves out of fear of jeopardizing their masculinity.

The fifth pillar is rape jokes. Dennis expanded on this by stating that finding comedy in rape merely normalizes it, thus permitting rape to occur. These jokes also serve to ignore victims, as they can potentially trigger rape victims and retraumatize them.

Misogyny allowing a glorification of men who abuse women is the sixth pillar. She gave examples of how Bill Cosby, Roman Polanski and others still resonate as innocent to some people.

The last pillar of rape culture is a lack of institutional support. Dennis explained that there are hundreds of thousands of untested rape kits each year and that the judicial system is extremely easy on rape cases, referring to Brock Turner as an example. Colleges, however, also have a tendency to dismiss rape, which led Dennis into the next portion of her presentation, which focused on how rape culture affects college students.

Dennis offered numerous alarming statistics about the abundance of sexual harassment and rape occurring on campuses. One of the most jarring reports she offered was that currently 317 colleges are under Title IX investigations. Even colleges not under investigation are far from perfect.

“Pretty much every school can do better,” Dennis remarked.

Ramapo is not currently under investigation.

Dennis also added that while colleges can disclose information about how rapists on campus are punished, most do not.

“Colleges time and time again don’t expel rapists,” said Dennis, “I think students have the right to know if a rapist is walking on campus.”

Dennis concluded her presentation by exploring what students can do to prevent rape culture. She believed that for long term solutions, mandatory and targeted consent lessons are key. Dennis added that there must be a cultural shift.

Lastly, she stated that one major solution is supporting survivors. This entails not blaming victims, creating safe environments for them, calling out those who joke or dismiss rape, getting better reporting systems and calling congress to push for laws specifically aimed to prevent rape, especially on college campuses.

“You can legitimately make a difference,” stated Dennis.

The presentation ended with Dennis taking questions from the audience. Students were eager to discuss their opinions with her, and it was evident that Dennis had sparked a dialogue with her presentation.

“If we do have more mandatory programs at this school, aspects of this presentation should be included,” remarked Kira Abrams, junior.

Sophomore Arielle Gordon also commented, “I think events like this are really import for addressing and starting to unpack rape culture.”