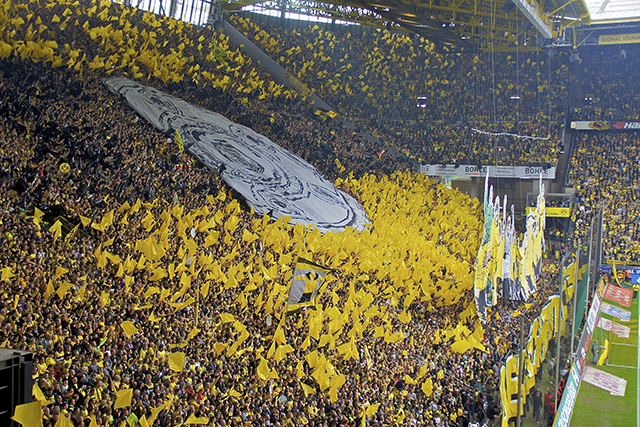 German Soccer Team Borussia Dortmund had a bomb go off near their team bus ahead of their Tuesday night game against AS Monaco.

The explosion was not major, but Dortmund Central Defender Marc Bartra had to be taken to the hospital where his arm was operated on for a minor injury. The game was then postponed to Wednesday for obvious security concerns.

As tragic as this situation was, an incredible display of sportsmanship soon followed.

With the game being postponed on such short notice, the AS Monaco fans that made the trip from France had no arrangements made for an overnight stay.

Borussia Dortmund’s Twitter account then organized the hashtag #BedForAwayFans to help the traveling Monaco fans find a place to stay.

Twitter was then flooded with pictures of Dortmund fans housing Monaco fans, showing the fans watching television, playing games and eating together.

This gained attention from all over the world, with fans hosting complete strangers in the face of an unprecedented situation.

At the game Wednesday, fans of both Dortmund and Monaco alike united in a chant in support of the German team and of its injured player.

Amid criticism of the game not being postponed for an even later date, the fans showed solidarity and unity with these signs of support for each other.

Even on such short notice, a Monaco fan was spotted with a customized “Bartra” Monaco jersey, in support of the injured defender.

With soccer rivalries usually infamous for causing fights in the streets and being unruly, the Dortmund and Monaco fans demonstrated what sportsmanship is all about. This was in the midst of a game that had huge implications for both teams, as it was the first of two games in the knockout round of the Champion’s League.

Dortmund fell to Monaco 3-2 but the teams will face each other again in France on Wednesday, April 19.