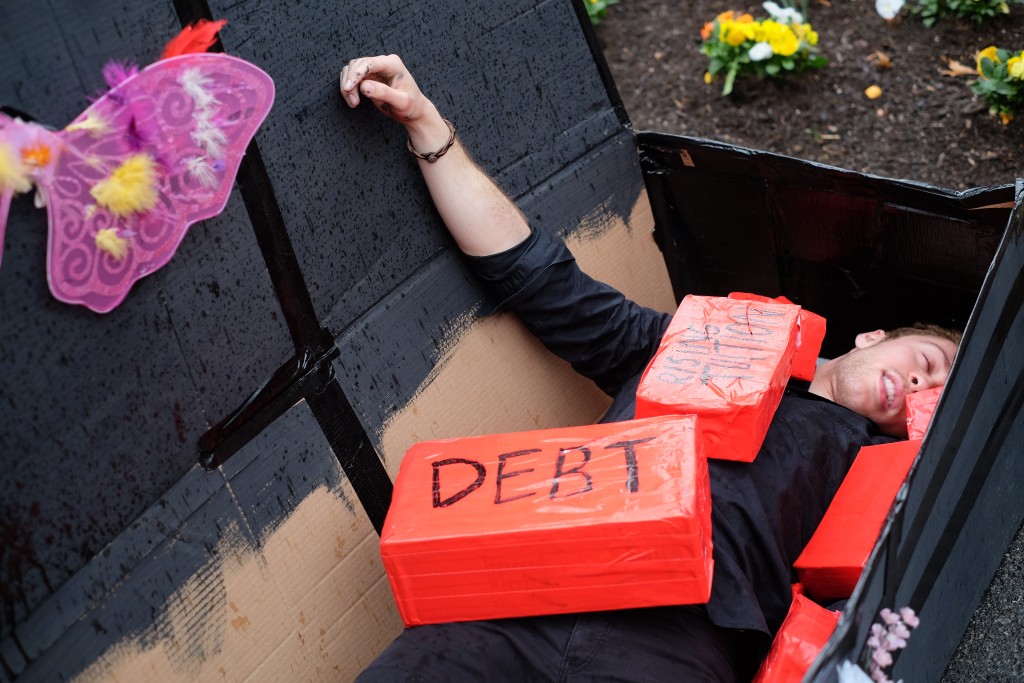 Students, professors, faculty and union members from the American Federation of Teachers gathered Wednesday to hold a “New Orleans Jazz Funeral” to highlight the decreases in state funding for higher education and the overall deterioration of higher education in the State of New Jersey.

According to organizers, the historically and culturally important New Orleans Jazz Funeral is a common form of social protest. As a result, campuses statewide have embraced it as part of a “day of action.”

The funeral procession started at noon. A light drizzle covered the league of black dressed mourners, the jazz band and onlookers that assembled below Ramapo College’s Archway.

Leading the congregation through the College grounds was a black casket labeled “N.J. Public Higher Ed.” The distinctive feature of the funeral caught the eyes of many onlookers as the procession traveled through hallways of the school.

The moans of instruments and wails of mourners filled the hallways like a siren, calling to attention the death of higher education. As the procession passed by students, members disseminated fliers detailing how the symbolic death occurred and educated others on how organizing interested parties may prevent this forecast.

At the conclusion of the march across campus, the casket was laid to rest below the Archway and was laden with a plethora of flowers.

Rain continued to dampen the congregation as eulogies were delivered atop a soapbox. Speakers delivered solemn addresses as the congregation wept in sorrow and mourned together over the passing of an “old friend” – New Jersey Higher Education.

According to Maria Vail, a Ramapo College professor and funeral organizer, the objective of the event was to underscore the primary responsibility of the New Jersey State Legislature to fund public higher education.

Vail stated, “Our youth is starting life with huge burdens unlike any previous generation. They are led to believe this level of debt at age 22 is normal – it is not.”

According to the New Jersey College Affordability Study Commission’s final report, state investment in higher education per full-time student decreased 25 percent in the 2014-2015 budget when in comparison to the 2000-2001 budget. Additionally, the Commission found that over 43 million individuals hold student loan debt nationally, which averages at $26,700 per student.

Vail continued to assail those who profit from student loans as criminals and rebuked the practice of providing tax breaks for the wealthy. According to Vail, this practice “robs our young generation of a viable future.” She continued to remark on the need for change in the State.

Vail concluded by saying jovially, “How can they fire you for playing on a kazoo?”