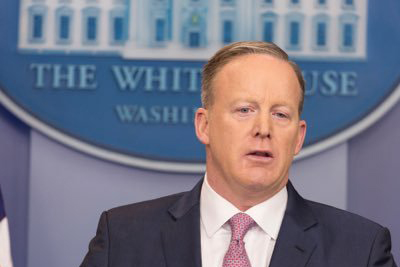 Nearly every week there seems to be a media tirade in which various outlets dissect the latest gaffe by the President and his team. The latest of these gaffes involves White House Press Secretary Sean Spicer in what can only be described as “alternative history”.

Acting in defense of President Trump's ordered missile strike on Syria, Sean Spicer voiced his support for the action, stating that the deed was justified.

Spicer doubled down on his assessment of the situation by equating Assad's actions to that of none other than Adolf Hitler while also making the case that Hitler was not this bad.

"You had someone who was despicable as Hitler who didn't even sink to using chemical weapons,"

These comments come as a result of President Bashar al-Assad's alleged use of the poison gas sarin on the Syrian town of Khan Shaykun. This attack was a response to the rebel overtaking of the area by jihadist group Tahrir al-Sham.  Assad has denied such involvement in the incident.

Spicer went on to challenge Russia’s alliance with Syria saying, "So you have to, if you are Russia, ask yourself: Is this a country and a regime that you want to align yourself with?"

Spicer’s comments of course not only had the reporters in the press box confused but also turned heads with pretty much everyone with a general knowledge of world history.  In an effort to save Spicer, a journalist immediately asked for clarification on his statement to which he made another gaffe in referring to the concentration camps of World War II as “Holocaust Centers”.

Spicer has since apologized for his statements on the matter saying that he made an, “inappropriate and insensitive reference to the Holocaust, for which there is no comparison”.

At this point however, apologies carry little weight coming from the Trump administration. Spicer’s comments are certainly not the first blunder of the new administration and most likely will not be the last. Ever since the election this past year there has been a total lack of accountability for the things which not only members of Trump’s team have said but the President himself.

For Spicer specifically, this incident just adds to his previous list of mistakes and inaccuracies including his antagonizing of the media, utilization of alternative facts and personal chastising of reporters. The amount of second chances given to Spicer and other members of this administration is troubling not only as representatives of the White House, but as officials in the administration of the President, the highest office in the United States of America. If people like Spicer continue to trivialize these matters the rest of the world will stop taking the United States seriously.