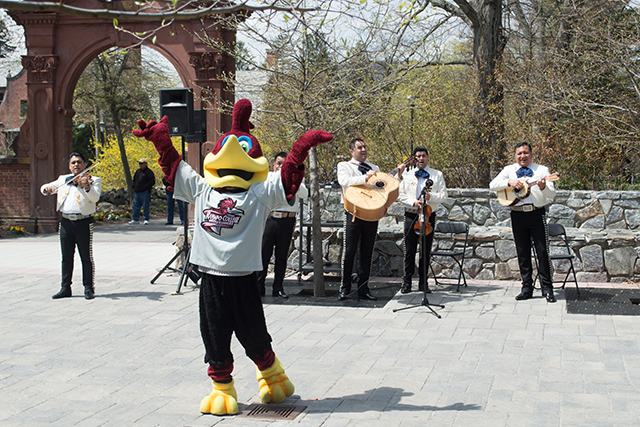 For the fifth year, Ramapo College held its annual World Expo event this Wednesday. The World Expo, an event that showcases multiple cultures, is designed to commemorate the diversity represented on campus, as well as promote opportunities to further develop knowledge on various cultures.

The World Expo was held at the Archway and Grove. At the event, students were able to visit an array of tables run by various organizations and clubs, some of which included Building Tomorrow, Sign Language Club, Greek organizations, International Studies Abroad and John Cabot University, an American liberal arts university in Rome affiliated with Ramapo.

Junior Haley Swedberg was one of the students helping to run the John Cabot University table. The University’s program provides Ramapo students the opportunity to study at the University in Rome for a semester. Swedberg herself participated in the program and was speaking on its behalf to students who were interested.

There were numerous other tables offering information on study abroad trips, as studying abroad gives students the opportunity to celebrate and experience a different culture, which was the entire purpose of the World Expo.

In addition to all the tables that were set up, the event featured performances from flamenco dancers, a Brazilian percussion ensemble, a mariachi band and West African dancers.

Attendees themselves danced to the music, encouraged by the Ramapo mascot, Ricky.

One of the highlights of the World Expo for many students though was the free food. Those who attended were able to receive free Italian ice, churros and bubble tea, in addition to any free food individual tables gave out.

“The churros were very delicious and I enjoyed them thoroughly,” stated April Callas, freshman.

Her friend, freshman Gianna Tetto, commented, “My favorite part of the event was the Pocky,” referring to the Japanese chocolate covered biscuits at one of the tables.

The plentiful giveaways were not limited to food however. Students who got there soon enough were able to get free World Expo T-shirts. In addition, the event’s raffles gave students opportunities to win a GoPro camera or a FitBit, as well as gift certificates to restaurants in the area.

The World Expo was also held simultaneously with the Food Festival in Birch Tree Inn, which was co-sponsored by Theta Nu Xi and the International Student Organization.

The World Expo is always one of Ramapo’s most anticipated events. The day is devoted to appreciating and celebrating the multiple cultures the community has to offer. It helps to create a better understanding of other cultures, as well as an inspiration to learn more about them.

“I think it was great that Ramapo had this event to educate the students on the world around them,” said freshman Scott Sample. “Hopefully students were well informed on the study abroad programs Ramapo offers.”