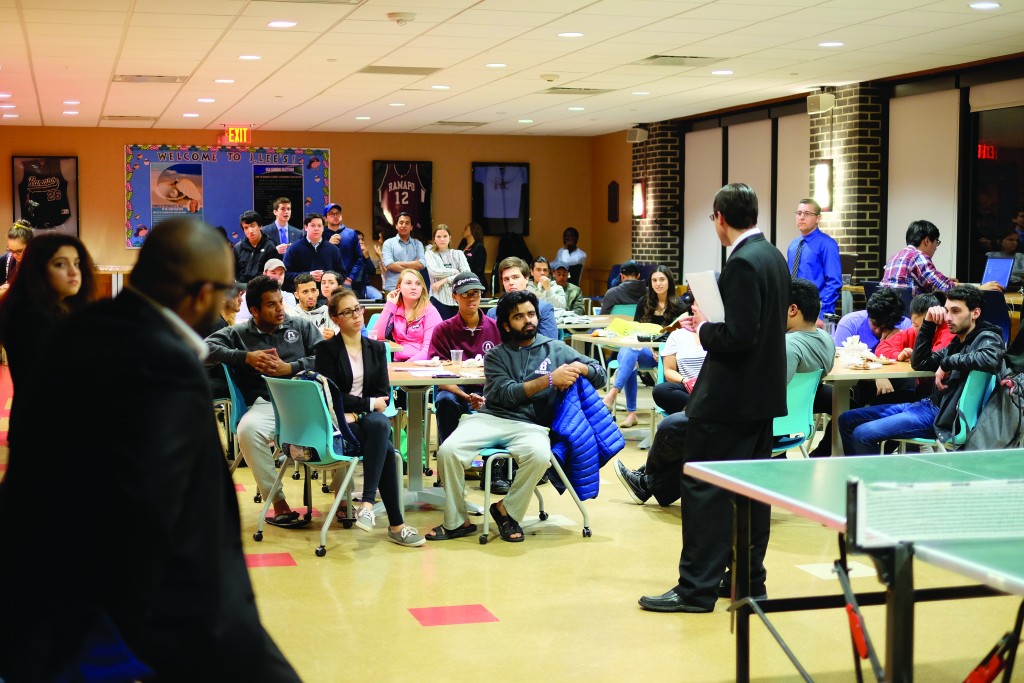 The Student Government Association, also known as SGA, is holding elections for next year’s student representatives. All students are encouraged to vote via the link sent to their Ramapo email accounts late Monday night. Voting is open until Sunday night. Ryan Greff and Stephan Lally, both freshmen, are running for president. Greff is a finance major and a current SGA senator. Lally is a political science major and also a current SGA senator.

Ramapo News: Why did you decide to run for SGA President?

Stephan Lally: “Honestly, I just want to take SGA to the next level. You have a state government in which you need to fight each year for every dollar of funding. In this environment, we need an SGA that works as an advocate on behalf of the students at the college level, at Trenton and at Washington.”

Ryan Greff: “I decided to run because I see the student body needs a leader that is willing to work with the school administrators. There are a lot of problems on campus that need to be fixed, now.”

RN: What are your top five accomplishments at the school?

SL: “Establishing the Student Emergency Relief Committee, writing ‘Principles Related to Immigration and Undocumented Students at Ramapo College,’ establishing a special relationship between Ramapo College and Kwame Nkrumah University of Science and Technology, testifying before the Assembly budget hearing for stronger state support on behalf of Ramapo College and enacting a program in which students transferring into Ramapo College have to go through a mandatory alcohol training program.”

RN: How is transparency important for the college administration and SGA?

SL: “For SGA, transparency is vital to SGA's success. Without transparency how could we possibly get input and criticisms from our constituents? An SGA runs best when there is high student involvement and transparency aids that. As to President Mercer and his administration, they should be transparent at all times when it is necessary. Any vital decision that affects students’ academic and campus life fits into the purview of the SGA. When the college administration has an open line of the communication with the SGA things run smoothly.”

RG: “I will most certainly strive to increase SGA transparency. I plan to use a wide array of mediums to publicize what the Student Government is doing.”

RN: How is your campaign platform different from your opponent’s?

SL: “I have established concrete objectives, which are outlined for what I want to get accomplished next year. For example, continuing the fight for OSS. But, overall I want to lead a more active SGA by having a new Public Relations Secretary, continuing advocacy efforts and continuing support for all clubs and organizations. Most importantly, I want to bridge the disconnect, that is currently present, between the general student body and SGA because we need more student input.”

RG: “I feel that there are a lot of issues on campus that don't entirely need to be advocated in Trenton for. While I do support advocating lawmakers for issues like switching the Laurel Plan and the TAS accreditation process, there are plenty of things that don't require Trenton lawmakers (like working for better Wi-Fi and increasing funding opportunities for student organizations).”

RN: What are the most important issues facing the campus?

SL: “Facing the SGA and the college’s administration are the budget hearings occurring in the state government because there are broad cuts in higher education. So programs like the Equal Opportunity Fund, which has seen a $3.5 million slash in its budget, are forced to make due with much less.”

RG: “The key issue is the communication, which there is a lack thereof as exhibited with the Laurel Meal Plan. We need to facilitate a better and more open communication so that the process is more integrated.”

SL: “I don’t take this position lightly. Additionally, there is no problem too small that students can approach me with. If it's real to you it’s real to me.”

RG: “I am ready to work hard and do whatever it takes to help the student body. I am committed to helping my fellow students – I have done it all year. I look forward to having the privilege to doing so in the future.”