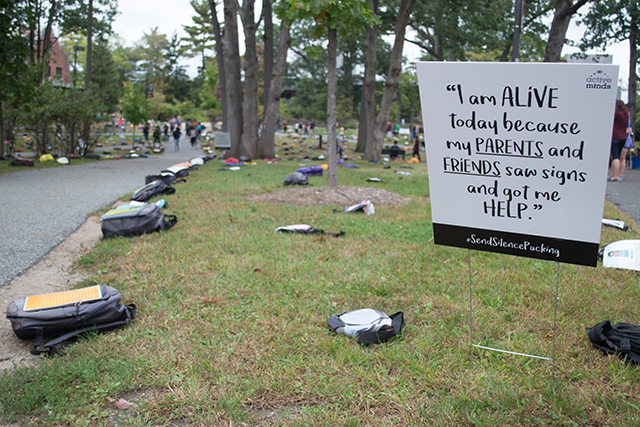 Ramapo College teamed up with Active Minds to bring the traveling display “Send Silence Packing” to campus last Wednesday. This is the second time that Ramapo has been able to host the display after first partnering with Active Minds in 2011.

The formal presentation of the display began at noon on Sept. 20 in the Grove, with Dr. Judith Green addressing the crowd of nearly 200 people.

“I am overwhelmed by the turnout; we had 40 to 50 student volunteers help to set up the exhibit of 1,100 backpacks, each one symbolizing a student that will take their own life each year,” said Green, of Counseling Services.

She also commented on how the exhibit was designed to raise awareness and display the resources that are available to students, such as the on-campus Counseling Services which are located in D-216.

“Since the exhibit’s 2008 debut, it has appeared at 200 stops, across 38 states, reaching more than a million students across the country,” Green said.

“When we send our young off, we send prayers, love and hope with best wishes so they can find out who they want to be," she said. "We don’t think about the stress, the difficulty to express oneself, and to feel a part of a group. When we talk about suicide, it is sometimes forgotten that each number is a person. When you look at each backpack, it’s a person.”

She ended her speech by saying, “I think Ramapo has made great strides, but none greater than this.”

Next semester will be the 10th anniversary of Ramapo’s Active Minds chapter. Active Minds had an interactive board up labeled “13 Reasons Why Not,” which allowed students to write their reasons to live and to encourage others to promote awareness of the issue. They also provided water bottles that had the National Suicide Hotline phone number on it, which is 1-800-273-8255.

“It was truly amazing to see a turnout of this size,” Lopez said as he looked out over the Grove. “It reminds me that there is hope, and that people can come together to help one another.”

Senior Alex Guzzo was walking in the Grove distributing sheets with facts about suicide in the nation.

“The reactions that people are having to reading some of the stories that go along with a particular backpack are really sobering,” Guzzo said. “When I would walk up to some of the viewers, they would open up and start a conversation with me, and it’s just a great thing. It really is inspiring and each interaction could help save a life.”

Junior Tali Felner was walking in the Grove with a group of her friends when she stopped to read a story on one of the backpacks.

“Although the event carries a very somber theme, the fact that people from every walk of life can come together and join forces to fight the stigmas and help people who are struggling is really cool,” said Felner.

The 20-minute training is available to faculty, staff and students. The program helps users identify people at risk for suicide, recognize the risk factors, protective factors and warning signs of suicide, as well as respond to and get help for people at risk.