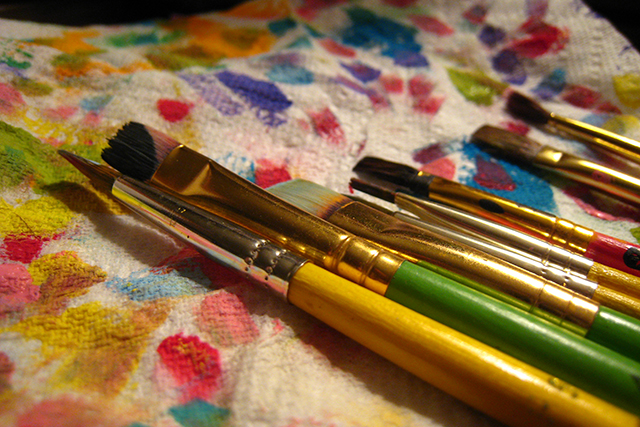 On Saturday night, the College Programming Board at Ramapo College hosted its night of Painting and Mocktails in Friends Hall.

There was almost a full house, as around 80 students were lined up to enter the event. Students were each provided with a plate of paint colors, brushes, an apron, canvas, and easel to work with for the event. While the students painted, CPB offered a selection of mocktails for them to drink while painting.

Sorin Lungo, a professional artist, led the group of 80 students through a painting of a Halloween themed painting, with a purple sky, black trees and a black haunted mansion with yellow windows.

Lungo enjoyed leading the event as well. He stated, “The event was wonderful. It’s always a pleasure to come here and see how so many people enjoy it, too.” He spoke about how although the paintings look difficult at first, he tries to break it down and make it easy for everybody. Lungo continued, “[the paintings] don’t need to exactly be like the painting that I bring it, that’s a sample. And let’s say we have 80 some people tonight, there are 80 some versions of the same thing. They’re beautiful, it’s your own interpretation, keeping within the design and colors. So they’re all wonderful.”

The event was extremely popular and students were eager to express how much they enjoyed the event. Sarah Catherine Lichon and Mayra Romero, seniors, stated that the event was “really fun.”

Lichon said, “We really do like the artsy ones, they’re really nice.”

CPB members were pleased at the great turnout as Carlie Viemann, junior, CPB member stated, “Painting and mocktails is actually a CPB tradition. We do it at least once a semester because it’s a great event. We especially love to do it in the beginning of the fall semester because it’s a great way for people to come out and really paint stuff and decorate their rooms and it’s really just a fun event.”

CPB has a partnership with Sorin Lungo’s painting studio called Creatively Yours, located in Ridgewood, NJ. In addition to their painting events, they have partnered for pottery nights in the past.