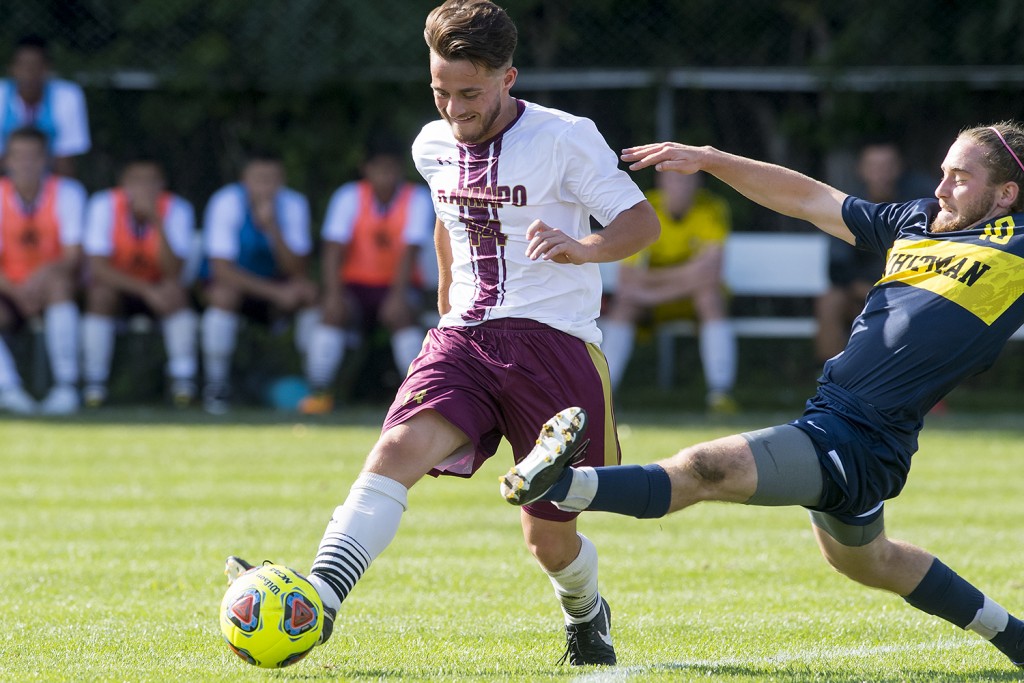 The Ramapo Roadrunners men’s soccer team lost to the William Paterson University Pioneers by a score of 4-3 in Mahwah on Wednesday afternoon. The loss marks Ramapo’s second New Jersey Athletic Conference defeat of the season, bringing them to a 4-6 record overall. William Paterson currently sits at 8-2.

Uncharacteristically warm temperatures made for uncomfortable playing conditions and mandatory water breaks were taken during each half. Both teams entered the game with three points in the NJAC standings and Coach Pinton understood the importance of winning conference games.

“One thing I’ve been very proud of is our NJAC play; we’re competitive, we’re giving good efforts, we just haven’t been getting results,” said Pinton.

Ramapo players acknowledged the importance of this match as they started with profound energy, scoring two goals in the first 10 minutes of play. Sophomore midfielder Ariton Mimini struck first as he capitalized on a poor William Paterson clearance and tucked the ball inside the right post in the ninth minute. Just two minutes later, Mimini was at it again as he played an inch perfect through ball, splitting the defense and hitting sophomore forward Joseph Fala in stride with only the keeper to beat. Fala delicately passed the ball into the back of the net in the 11th minute as Ramapo looked to be cruising to victory.

In the 37th minute, William Paterson received some much-needed luck in the form of an officiating error as a clear hand ball and denial of a goal-scoring opportunity from Pioneer junior defender Charlie Lizando should have resulted in a red card, however the referee saw fit to only show yellow. The call became even more controversial as Lizando went on to score off his head just two minutes later. Pinton was reluctant to place blame but understood how important the moment was.

The Pioneers added a second goal when sophomore forward Kyle Adams tapped in the equalizer after a quick counter attack in the 48th minute.

The second half started the same as the first with Ramapo scoring early. After some intricate passing, junior forward Edward Franzoni saw a deflected ball drop perfectly to his left foot as he finished with a top shelf strike in the 50th minute to give Ramapo the lead once again. Not to be outdone, William Paterson’s sophomore midfielder Cameron Allen hit a curling left-footed golazo from 25 yards out in the 52nd minute to equalize yet again.

The heat began to play its part as the game opened up and both teams were beginning to drag. Ninety minutes were not enough to separate the sides and two 10-minute sudden death overtimes were up next.

In the second overtime, Ramapo’s senior goalkeeper Ryan Sprague came off his line and got beat to his left as the ball made its way to Adams, who easily tapped in his brace for the game winner.

The Roadrunners have no time to dwell on defeat as they are back at it again in NJAC play this Saturday as they take on Rutgers-Camden at 1:00 p.m.