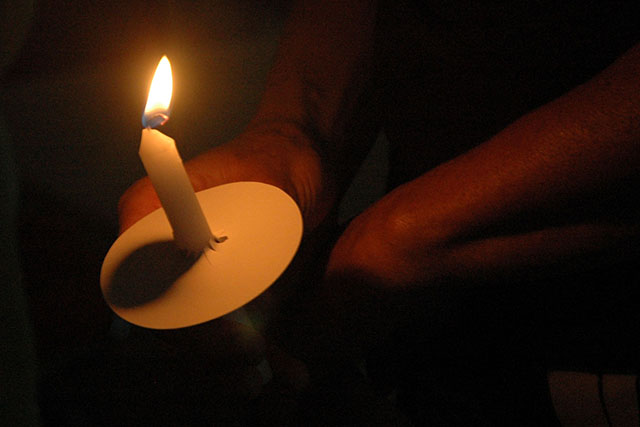 As National Hazing Prevention Week came to a close, the Office of Sorority and Fraternity Life, or OFSL, hosted its annual candlelight vigil on Thursday by the Arch.

This year marks the seventh year National Hazing Prevention Week has been hosted at Ramapo College.

Amanda Riehl, the new coordinator of OFSL, stated, “The Office of Fraternity and Sorority Life, in addition to our zero-tolerance hazing policy in place for all Greek-letter organizations, has taken the initiative to annually hold National Hazing Prevention Week to raise awareness about hazing on college campuses, and provide resources and events that provide knowledge of hazing and how to prevent it.”

She also explained that all new members of the Greek community are required to undergo hazing prevention education.

Riehl started the ceremony on Thursday by lighting the candles and stating, “This vigil is in remembrance of all those who have lost their lives to hazing across the country and in the last 10 years.”

She continued, “Our mission is to educate and to eliminate senseless acts of hazing, not only at Ramapo College of New Jersey, but across the country.”

The ceremony was mostly attended by Greek life members from each organization who reflected on the issue of hazing.

“I am strongly opposed to hazing,” said senior Berly Rivera. “I think that there is no way to build a foundation for strong sisterhood or brotherhood if you begin by hazing and putting down your member.”

This year’s vigil was inevitably more somber than those of years past, because of the recent unfortunate passing of Timothy Piazza of Hunterdon County at the hands of the Beta Theta Pi fraternity at Pennsylvania State University.

The story of Piazza was told and remembered during the vigil. Piazza’s death was the harsh result of forced drinking, mandatory hazing and other illegal activities.

“This wasn’t boys being boys — this was murder of our son,” Piazza’s father told CBS News. “They tortured him for 12 hours, they let him suffer for 12 hours. He died a slow and painful death at the hands of these ‘men of principle,’ as they call it.”

According to StopHazing, “More than half of college students involved in clubs, teams, and organizations experience hazing, which happens across a range of student groups from varsity athletics and social fraternities or sororities to academic clubs and honor societies.”

Elizabeth Allan and Mary Madden, researchers at the University of Maine, reported to StopHazing that, “73 percent of students participating in social fraternities and sororities have experienced at least one hazing behavior.”

Ramapo College has strict, no tolerance policies regarding hazing.

“Cases of hazing or concerns of hazing going on at Ramapo College of New Jersey can be brought to myself, the Office of Public Safety, and the Office of Student Conduct,” said Riehl. “Additionally, cases can be reported to the Mahwah Police Department.”

“It brings a negative name and connotation to Greek life,” Patricia Knodel said. “It has so many negative consequences that really impact not just the Greek community but college communities.”