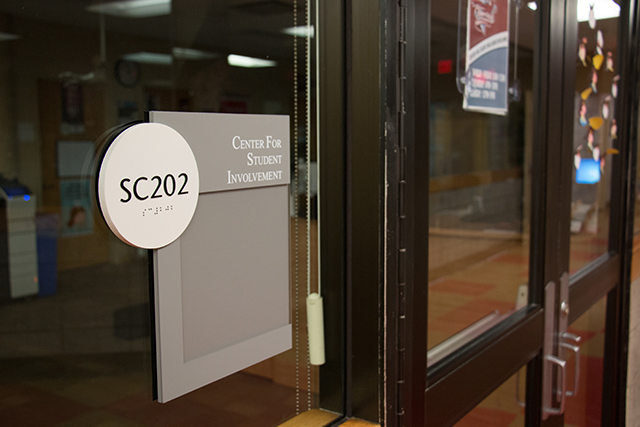 The Center for Student Involvement welcomed two new professional staff members to their team on Aug. 21. Michael MacStudy began his role as the Coordinator of Commuter Affairs and Amanda Riehl started her role as Coordinator of Fraternity and Sorority Life.

MacStudy arrives at Ramapo having completed his undergraduate and graduate work at Salisbury University on the eastern shore of Maryland. He earned degrees in both conflict analysis and dispute resolution. Starting his collegiate career as a football player, MacStudy transitioned to involvement as a commuter mentor after he stopped playing. Working in the commuter program at Salisbury opened up other opportunities that led him to where he is today.

After six years in Maryland, MacStudy was looking for a new start and a change of scenery. Returning to his home state was an added benefit to joining Ramapo, which he became even more excited about after his interview. Jumping right into the thick of things, with the assistance of student staff and commuter student mentors, MacStudy led the Second Annual Commuter Summer BBQ on his second day of work at Ramapo.

"Helping to welcome more than 100 new and returning commuter students to campus was a great way to get my time here started and I can say that I started my journey at Ramapo with them," MacStudy said.

He also shared how much he enjoyed the Arching Ceremony, noting that it was a tradition unlike any he had at his alma mater.

MacStudy wrapped things up by sharing his excitement for next month's Trunk or Treat. The event, slated for Oct. 27, features cars decorated by clubs, organizations, fraternities, sororities and campus offices and allows children in the Mahwah and Ramsey communities as well as children of faculty, staff and students at Ramapo to trick-or-treat on Ramapo's campus.

"I've been told that it is an amazing event and I hope to build on the success of previous years and continue to grow and expand what we offer the kids," MacStudy said.

Riehl joins Ramapo after earning both her degrees at Montclair State University. She earned her undergraduate degree in public health education with a concentration in community health education and her graduate degree in educational leadership with a concentration in higher education. As an undergraduate student she joined her sorority, Phi Sigma Sigma – a decision that ultimately led her to pursue higher education and student affairs as a career.

Prior to her interview with Ramapo, Riehl had never stepped foot onto the campus, but she was excited to experience a campus and a community that was completely unfamiliar to her.

“From the second I stepped foot onto campus, I was greeted with warm hellos, and a feeling that this was a place I could call home,” she said.

Riehl shared two highlights of her first month at Ramapo. The first, similar to what MacStudy shared, was experiencing the Arching Ceremony. As she watched from a balcony above the courtyard, she could not help but see the immense joy on the faces of the new Roadrunners as they walked through the path of their family and friends and as they shook the hand of President Mercer at the Arch.

"Although I do not get emotional easily, I definitely shed a tear seeing the excitement on our new students' faces as they officially called Ramapo home for the first time," she said.

She also commented on how exciting it was to have 250 unaffiliated Ramapo students attend Meet the Greeks and get a chance to interact with and get to know members of the 25 chapters on campus.

"I am super pumped to dance the night away along with fellow Roadrunners for the Children's Miracle Network," she said, smiling.

Both MacStudy and Riehl have their offices in the CSI Main Office, SC-202, across from the bookstore on the second floor of the Student Center. You can stop by to meet and work with either of them or email MacStudy at mmacstud@ramapo.edu and Riehl at ariehl@ramapo.edu.