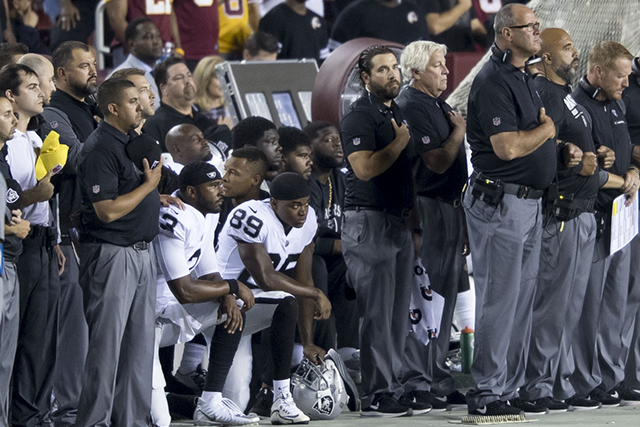 On Sept. 25, the entirety of the Cowboys football team including coaches and executives kneeled before the national anthem began, then stood and linked arms as it played.

On Oct. 1, approximately 30 of the San Francisco 49ers knelt during the anthem while a player stood behind them with a hand on the kneeling player in front of them. Incidents of teams or individual players making a physical statement during the anthem have been rapidly spreading across the NFL in the past few weeks.

The reason that he was kneeling during the anthem was to protest against the unjust police brutality that people of color have been experiencing. In a statement to ESPN, Kaepernick talked about how he could not stand to see another “hashtag Sandra Bland, hashtag Tamir Rice, hashtag Walter Scott," and instead asked when people would recognize the injustice occurring and take a stand. Kaepernick was using his position as an NFL football player to draw attention to an issue that he felt was not getting enough attention.

Oddly enough, the statements by Kaepernick himself, his actions and now the actions of other NFL members are continuously being misinterpreted. Some hold the view that the reason for kneeling is rather disrespectful.

Conservative news outlets such as Breitbart are changing the narrative to make it seem as if somehow the kneeling and other forms of protest during the anthem are meant to be anti-American and an affront to the military. A peaceful protest meant to spark conversation about racial injustice has been twisted and contorted by these news outlets, diminishing the true intent in an attempt to make it something it never was.

Not only have news outlets distorted the reasoning behind the protests, but it seems as more and more NFL teams and players join in on the cause, the original meaning has taken a back seat. Rather than focusing on police brutality and racial injustice, the NFL teams have been making statements about unification within the league, as well as making statements against President Donald Trump.

President Trump has stated that anyone who protests during the national anthem in the NFL should be fired, and that the NFL should make rules prohibiting any forms of demonstration during the anthem. This, in turn, has sparked more players to join in on the protesting, but seemingly not for the right reasons.

The shifting of the focus away from police brutality against racial minorities has occurred on both sides of the argument – whether it is conservative outlets or NFL teams’ statements. If the demonstrations during the anthem are to be successful in creating discussion about racial issues like Kaepernick desired, the first step must be to accept why these protests started in the first place.