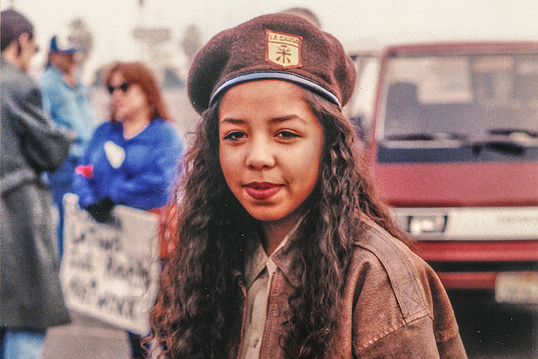 Most people do not know much, if anything, about the militant Chicano civil rights organization, the Brown Berets. The Women Center’s Student Equity and Diversity Peer Educator, junior Maria Martinez, wanted to change that. This past Monday, Martinez paid tribute to the Brown Berets by educating her fellow students about the organization with a presentation titled “Then and Now: The Brown Berets” as part of Latin@ Heritage Month.

Martinez began her presentation by providing background information to those in attendance, as most were unfamiliar with what the Brown Berets even were. She explained that the organization was made up of high school students who met at the Annual Chicano Students Conference in the 1960s. Chicano is interchangeable with Latino, Martinez explained for students unacquainted with the term. Members of the organization wore brown berets to symbolize their unity together, thus earning the name “Brown Berets.” The organization fought against police brutality and wished to reform immigration, education, health care and more.

Martinez specifically delved into the Brown Berets’ opposition to policy brutality and inadequate education. She spoke about how the Latino community felt targeted by the police, mentioning how protests broke out in 1967 after a Chicano youth had his life taken by a policeman.

Martinez also discussed education at length, and showed a video in regards to the East LA Walkouts that occurred in 1968. The video, “SAL CASTRO & the 1968 East LA Walkouts,” went into detail about the insufficient schooling the majority of Chicano students received. It mentioned that three-fourths of Chicano students did not even finish school and that speaking Spanish was forbidden in class.

Therefore, the oppressed students and their mentor, Sal Castro, a teacher at Lincoln High School, formulated a list of demands, including more Mexican-American history, teachers and counselors, as well as more schools in general. They were met with indifference from school officials, so eventually the Brown Berets helped them organize the East LA Walkouts. Though students were threatened with expulsion and the termination of scholarships, over 20,000 students participated in the walk. The video explained, however, that the consequences for their protest was utter violence, as the Chicano community was met with cruelty and brutalization from police in the days following the demonstration.

“It was a peaceful protest but the police beat them up for expressing their amendment right to free speech,” said Martinez.

After the video, Martinez talked about what is left of the organization today. She explained that their numbers have dwindled considerably due to being singled out by the police. She likened them to the Black Panthers, which was also a militant civil rights group whom the police targeted. This led to the disbanding of the Brown Berets in 1972. Over the last few decades, however, the organization has resurged, though admittedly not to its former glory. The Brown Berets continue to be influential, though. They have been allies to the Black Lives Matter movement and the Dakota Access Pipeline protests, as well as fierce objectors to the Trump administration’s dealings with DACA.

The Brown Berets have even made news as of late. This past August, CBS ran an article about the Brown Berets putting together a petition in an attempt to rid San Jose of a Christopher Columbus statue, feeling that it “represents the genocide of native Americans.” Additionally, last year CNN reported about the group’s support of Black Lives Matter when a picture went viral of two members of the Brown Berets standing with a member of the Nation of Islam. The picture’s caption reads, “In solidarity with BLM Los Angeles Womyn of the East Los Angeles Brown Berets standing in formation with the Nation Of Islam.”

Despite the Brown Berets’ impact over history, the group is often overlooked.

“I think it’s important to know about the history that happens in this country,” said senior Benjamin Scherr. Martinez agreed, stating that she felt most students grow up learning a “sanitized” version of history.

Senior Clare Moloughney said, “I had no idea there was something called the Brown Berets and how it was like the Black Panthers.”

Martinez ended her discussion by encouraging the students to be inspired by the Brown Berets. She pointed out that these were high school students who started this organization which has impacted the course of American history. While many students often feel stifled by their young age, Martinez said the Brown Berets showed that “anyone can be an activist and promote change in their communities.”