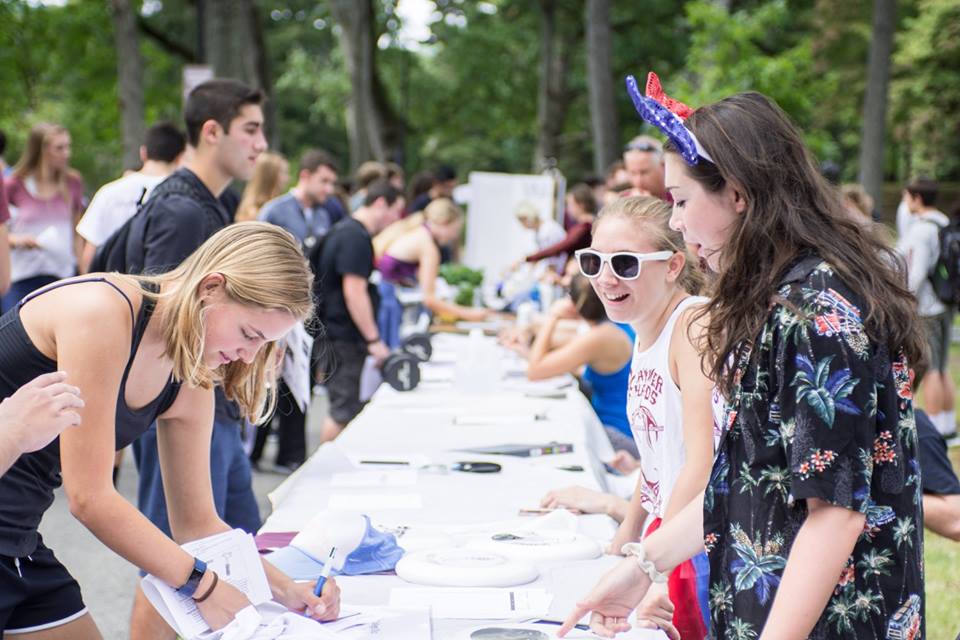 While students come to college with the intention of graduating with a degree, one of the most important parts of their life is getting involved on campus.

Two students who have been particularly involved in their time here at Ramapo are senior Melissa Mitariten and sophomore Stephan Lally. Both have participated in a wide range of activities and organizations on campus and have reflected on their involvement experience to provide advice to fellow Roadrunners.

Mitariten has been very involved throughout her four years at Ramapo. In high school, Mitariten was not really involved outside of academics, but she knew that she wanted to change that going into college. Mitariten’s involvement started with the group Active Minds, an organization that focuses on mental health and getting rid of the stigma associated with mental illness. Mitariten first encountered the group at the Student Involvement Fair during her freshman year. She instantly connected with the group and started going to the club’s meetings.

When the club was looking for eboard members the following semester, she decided to take a position and became the historian. Over the summer, however, the president needed to step down, so Mitariten took over that role and became the Active Minds president her sophomore year. Mitariten is no longer the president, but she is still actively involved in the organization.

“Doing work for Active Minds, or any of my clubs and organizations, isn’t a chore, it’s something that I deeply enjoy and have a good time doing,” said Mitariten.

In addition to Active Minds, Mitariten is also involved in the Global Roadrunners Club, Alpha Sigma Alpha sorority and participated in Sophomores Advancing in Leadership, or SAIL.

As a nursing major, balancing her involvement and academics has certainly been a challenge for Mitariten, but she has been able to manage that challenge.

“At the end of the day, school does come first,” she said, “but I’m able to prioritize schoolwork and I also utilize a to-do list with my club to prioritize my responsibilities with that as well.”

Other tips Mitariten offered included delegating tasks and asking for help when needed. Overall, Mitariten is very grateful for her time at Ramapo, and glad that she has been so involved. She credits breaking out of her shell to her active involvement, stating, “If I just came to college, stuck my head in my books, got my work done and graduated, I don’t think I would have enjoyed these past four years as much as I have,” she said.

Lally, a political science major, is currently the President of the Student Government Association, or SGA. His involvement at Ramapo, however, began even before his first year. Lally was a part of Leaders in Service, or LIS, a program that allows first year students to move in early and spend four days doing leadership activities and community service.

Through LIS, Lally met Dr. Rick Brown, Director of the Center for Student Involvement and one of the advisors of the SGA. Dr. Brown encouraged all participants to get involved right away on campus by running for a position in SGA. Lally took Dr. Brown’s advice, ran for a senator position, and won the election.

Lally takes a lot of honor in his role as Student Government Association President.

“I see it as a position of service,” he said. “I take pride in being able to serve the students each and every day.”

In his experience as an involved student, Lally has found some helpful strategies that work for him to stay organized and manage his time. Lally utilizes the calendar app on his phone to set reminders and make sure that he never misses any meetings or activities. In addition, Lally makes sure that he always gets enough sleep.

“I have an 11:15 bedtime, so I always make sure I’m done with my homework by then. Rest is very important.”

Along with time management and getting enough sleep, Lally also finds it very important to delegate.

“A lot of people think leadership is doing it all yourself,” he said, “but smart leadership is delegating certain tasks to others so that you don’t spread yourself too thin.”

Through these various strategies, Lally has been able to successfully balance his many roles on campus with his life as a regular student.

Being involved has been a positive factor in the lives of both Mitariten and Lally. Mitariten feels that the leadership skills gained in her many roles at Ramapo are helpful skills that she will carry into the rest of her life. As a future nurse, leadership skills such as delegation, communication and time management will certainly be applicable in Mitariten’s future.

“No matter what year you are, your opinions and viewpoints matter,” Lally concluded. “The more people we have getting involved in SGA or other clubs and orgs will better the campus community overall.”

If you are looking to get involved on campus, stop by the Center for Student Involvement main office, located in Student Center 202 (right next to the bookstore). You can also check your email for the weekly emails “In the Loop” and “Weekend Edition” to find upcoming events and leadership opportunities.