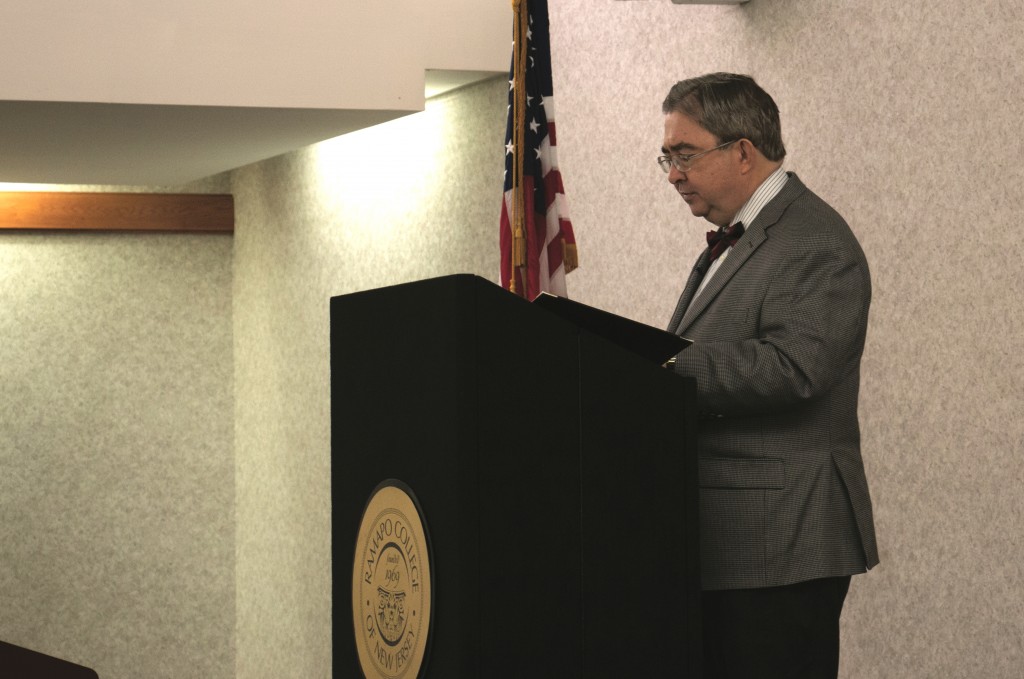 Change was the theme of President Peter Mercer’s Fall 2017 State of the College Address on Wednesday in Friends Hall.

Mercer noted the milestones met by members and departments of the Ramapo College community, starting off with how the College as a whole proved that goals of improving academic quality and diversity were compatible, as the Middle States Commission stated in their last report of the College.

Mercer compared how in 2007, 20.2 percent of the population of 5,393 students were non-white, but this year, 31 percent of the students are non-white. Moreover, he noted, “41 percent [of the non-white undergraduates] are from this year’s freshman class”, which is an “extraordinary development.”

“This is the result of our determined efforts to make that change,” Mercer stated.

Mercer then moved on to the campaign for learning developments.

“It continues to advance as a result of the tremendous generosity of our board members and our alumni,” Mercer reported.

There is a total of $7 million, as well as an additional $2.5 million in pending gifts, for the funding of this campaign. He made sure to stress the importance of endowments for both operations and scholarships made available to students. This year, there are 424 scholarships and awards available.

Mercer was sure to make note of the high rankings Ramapo has earned recently in reports such as the Colleges of Distinction, Military Friendly and Kiplinger’s. Student Loan Report recognized Ramapo in the “top 2 schools in NJ for offering part time employment opportunities to students.”

Mercer gave an update on Title IX, an important issue that has been brought up many times in various open meetings in the recent past. Kat McGee, the Director of Title IX, ADA and Compliance Training, participated in a meeting last month with Senator Menendez “discussing Title IX, campus sexual assault and the shorter and long-term effects of revoking the current Title IX guidelines,” Mercer reported.

The Office of Health Services “is now a HIV testing site as designated by the Department of Health,” Mercer announced.

Free HIV testing can be routinely offered to students directly in the health center. The service is funded through the federal Ryan White HIV/AIDS Program Legislation, and Ramapo is one of five colleges in New Jersey to offer the service.

Ramapo’s Center for Health & Counseling Services now offers the ENHANCE program, which provides “additional services beyond those required by law,” Mercer explained. The program is a support program to help students with Autism Spectrum Disorder and Asperger’s Syndrome.

Throughout the address, Mercer noted topics including the increasing recognition of the value of liberal arts education, new Board of Trustees members, faculty, student and alumni engagements and accomplishments, Disability Awareness Month, Queer and Trans Awareness Month, grants, the importance of academic advisement and business and infrastructure at the College.

Unlike the few addresses in the recent past where there was tension in the air while numerous questions were asked following the address, Wednesday’s address ended on a calm note.