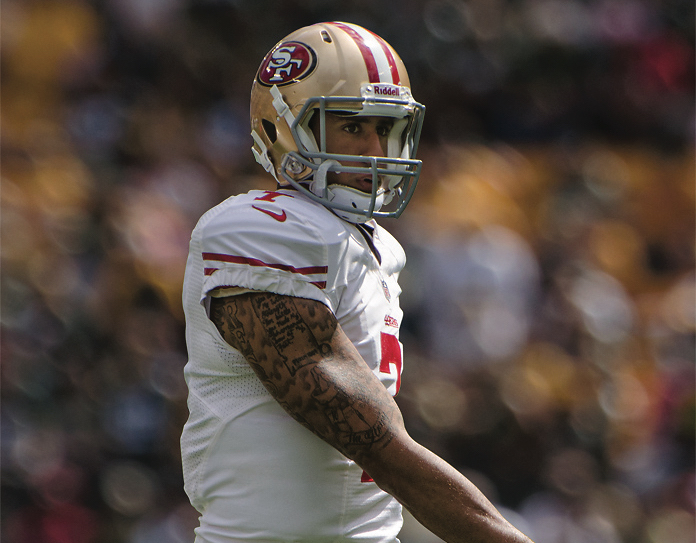 During the San Francisco 49ers’ third preseason game last year, cameras caught then-49ers quarterback Colin Kaepernick sitting on a bench while the national anthem was playing. Following the game, Kaepernick explained his reasoning for sitting is because of the oppression and hardships people of color are facing, especially in the form of police brutality. Nate Boyer, a former Green Beret for the U.S. military and NFL long snapper, met with Kaepernick and co-created the idea of taking a knee rather than sitting.

Now, a year later in week five of the 2017 NFL season, more and more players have begun peacefully protesting during the anthem; whether it be interlocking arms, raising a fist in the air, taking a knee, sitting down or not even showing up onto the field. Kaepernick, who has been left without a team since he opted out of his 49ers contract in March, remains unsigned by an NFL team.

President Trump has expressed his disapproval of the players’ protests. Recently at a political rally in Alabama, the president gave a speech in which he stated that NFL owners should fire any player who took a knee during the National Anthem, saying, “Get that son of a bitch off the field right now.” This past weekend, Vice President Pence attended the Indianapolis Colts and San Francisco 49ers game and left after witnessing players kneeling during the anthem. Later, Pence tweeted, “I left today’s Colts game because President Trump and I will not dignify any event that disrespects our soldiers, our Flag, or our National Anthem.”

Fans tend to view sports as a safe haven where they tune in, cheer for their favorite teams and to forget about what is going on around them for a few hours. However, after both instances, sports and politics have started to mix, bringing about the controversial question of whether or not politics and sports should be intertwined, as well as if athletes have a certain responsibility to use their platforms to speak up for their beliefs.

Due to the prolonged duration of these protests that have lasted well over a year, gaining more momentum and speculation all the while, people seem to have forgotten what Kaepernick was originally fighting for. It seems as if the public is heavily divided between supporting the players. Some believe that the players are disrespecting the flag. Others insist that the First Amendment right for freedom of speech allows athletes to stand up for what they believe in. Since athletes garner more national exposure based on their platform, when they use it as a way to express their beliefs and to draw light on injustices they feel are happening in today’s world, it is bound to be met with backlash of people telling these athletes to “stick to their sport” or “focus on their game.”

In fact, Eminem just dropped a freestyle rap at the BET Awards on Tuesday night lashing out against Trump and addressing the president’s problems with the NFL with lyrics stating, “He gets an enormous reaction/ When he attacks the NFL so we focus on that/ Instead of talkin’ Puerto Rico or gun reform for Nevada/ All these horrible tragedies and he’s bored and would rather/ cause a Twitter storm with the Packers.” Colin Kaepernick, among many other celebrities who took to Twitter to praise Eminem, tweeted “I appreciate you @Eminem” followed by an emoji of a black fist proudly raised in the air.

While some may not support the protests and the manner in which these athletes are trying to get their message across, it is important to understand that everyone has rights and they are entitled to exercise them, even athletes whom society sometimes forgets are ordinary people with feelings and opinions just like everyone else.