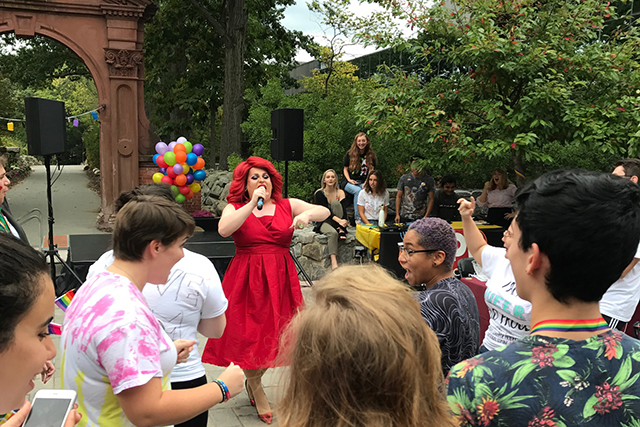 National Coming Out Day is a time to celebrate and support Lesbian, Gay, Bisexual, Trans, Queer/Questioning and other identities, or the LGBTQ+ community, as well as raise awareness about the specific problems these groups face. To celebrate National Coming Out Day on Oct. 11, Ramapo hosted Pridefest, an event specifically designed to create a safe and fun environment for the LGBTQ+ community. This event is in accordance with Queer and Trans History Month.

“It is about being confident in who you are and not being afraid of sharing your authentic self with not only the Ramapo campus, but in the community in general,” said sophomore Nat Dahl, a Women’s Center diversity peer educator and queer peer service coordinator.

The event, which took place at the Grove, was a lively affair filled with music, laughter and, of course, pride. Delicious pretzels, colorful fruit and rainbow cupcakes were all being served throughout the event. The Women’s Center was also giving out free t-shirts and pins. Students could even take part in activities and crafts, such as making bracelets.

There were also numerous on and off campus cosponsors at the event, many of which offered valuable connections and resources for the LGBTQ+ community. There were tables educating students about HIV testing, sexual assault, the campus’s Title IX program and more.

“It means a lot to know what resources are available,” said freshman Spencer Love.

Another table was devoted to registering students to vote, which was being run by the Civic and Community Engagement Center, or CCEC. Gabby Bok, a sophomore who works at the CCEC, explained that they wanted to promote “democratic engagement” and “make sure students have a voice.”

“Our goal is to register the community to vote so they can use their vote to support the LGBTQ+ community,” said Bok.

The main event, however, was a performance by Vita Summers, a drag queen from New York. Students may recognize Summers from her performance as a background dancer during Katy Perry’s Saturday Night Live Performance of “Swish Swish.”

Summers was wearing a bright red dress and beautiful shining red heels, as well as a sparkling personality to match. The crowd fully embraced her as soon as she took the stage.

“We're going to celebrate National Coming Out Day by just being yourself because that's all that really matters,” she said to begin her performance, which was met by a round of applause.

Summers sang along to songs like “Uptown Funk” and “Bang Bang.” Throughout the songs, she encouraged everyone to dance and sing along with her, and many people joined in. The performance was unfortunately interrupted by rain, but Summers did not let it stop her.

“I don't mind getting wet. I need to get out of drag somehow, it just makes the process shorter,” said Summers.

Pridefest not only celebrated diversity and individuality, but also encouraged students to be proud of who they are. Pride is an essential component of the LGBTQ+ community. Too often throughout history, people of this community were told to be ashamed or to hide who they were, instead of embracing their identities. This is why National Coming Out Day and Pridefest all play a fundamental role in providing support and unity for this community.

“Pride is owning your identity and recognizing it as an integral part of who you are, but in a positive light,” said Love.