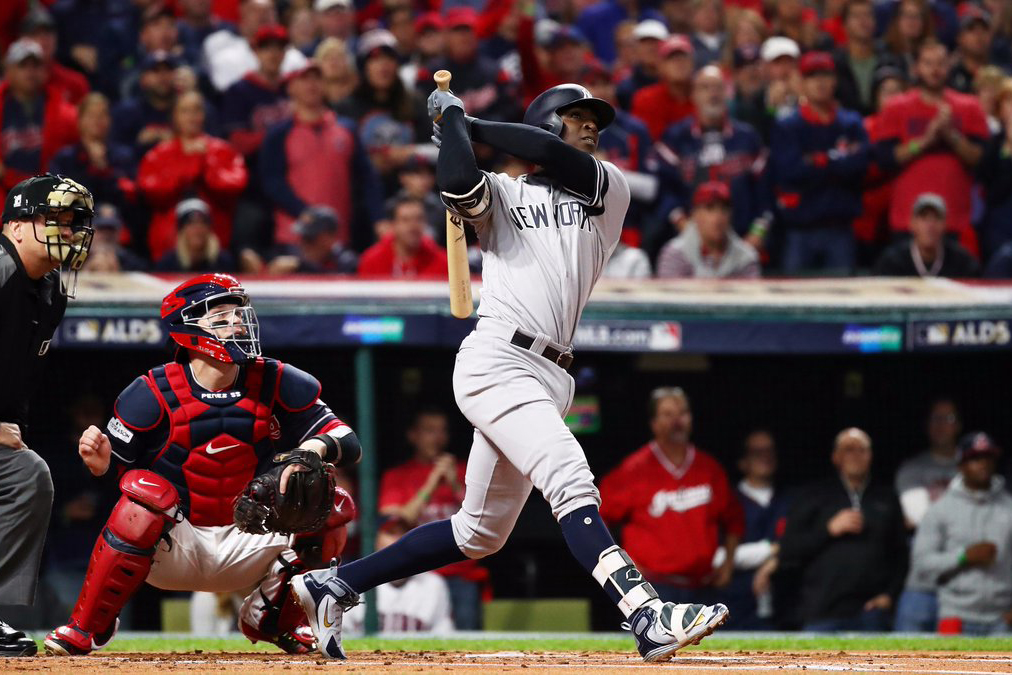 The stage has been set for the final game in the American League Divisional Series between the Cleveland Indians and the New York Yankees. The Indians took the first two games, beating the Yankees in Cleveland. The Yankees answered with two home wins of their own to tie up the series for the winner-take-all Game 5. The series went back to Cleveland on Wednesday night to determine who will be playing the Houston Astros in the American League Championship Series.

Both teams pitched their Game 2 starters, Corey Kluber for the Indians and CC Sabathia for the Yankees. The Indians had home field advantage and Edwin Encarnación back in their lineup after leaving Game 2 with an ankle sprain. However, the Yankees had the momentum of winning the last two games.

The game started off with a bang, as it seemed Corey Kluber found himself after getting the first two batters out of the game. Didi Gregorius, on a 0-2 count, took an inside fastball deep over the right field wall to give the Yankees the first run of the game. Indians catcher Roberto Perez was set up outside, but Kluber missed the location and gave up the home run.

In the top of the third inning, it happened again. After a leadoff single by Brett Gardner, Gregorius hit his second home run of the game. “Sir Didi” extended the Yankees’ lead to 3-0 after three innings of play. Early on, it seemed to be the Didi Show.

The Indians acted quickly after a fourth inning walk to Jacoby Ellsbury by pulling Corey Kluber. Manager Terry Francona made the call to the bullpen surprisingly early as Kluber only threw 68 pitches to this point. The former Yankee Andrew Miller was the first reliever called upon in Game 5.

The Indians finally answered back in the fifth inning. Sabathia gave up four straight hits that included back-to-back RBI singles by Roberto Perez and Giovanny Urshela. Manager Joe Girardi pulled Sabathia after the single by Urshela to bring in David Robertson with runners on first and second with one out. Two pitches into his appearance, Robertson got Fransico Lindor to ground into an inning-ending double play to keep the score 3-2.

Before Chapman could come out for the ninth inning, the Yankees built on their lead. Brett Gardner went 11 pitches before hitting an RBI single to score Aaron Hicks from second base. The single was fielded by right fielder Jay Bruce but he made an error with his throw into Lindor. Todd Frazier scored on the throwing error to extend the lead to 5-2.

Chapman entered the ninth inning with a three-run lead. After walking the leadoff batter, Chapman collected himself. He struck out two of his three outs in the inning. On a 100mph fastball, Chapman struck out Austin Jackson for the final out of the ALDS.

The New York Yankees will make it to the ALCS for the first time since 2012, where they will be taking on the Houston Astros for a spot in the World Series.