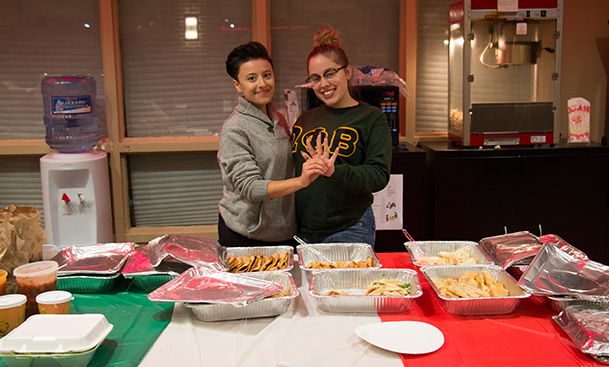 Lambda Theta Pi hosted their fourth annual Una Noche Mexicana at J. Lee’s on Thursday night. Students that stopped by were welcome to try a variety of Mexican foods, beverages and candies. The food was catered by La Hacienda, located just a few minutes away in Suffern, New York.

“It was a unique array of food that I’m not used to seeing on campus and it was cool to see the cute snack foods they brought too,” said junior Christine Mausser.

The food table offered an abundance of tacos de pastor and cheese quesadillas along with classics like chips, salsa, beans and rice. There was also a wide variety of Mexican sodas such as Sidral Mundet, Squirt and Jarritos. In the spirit of Halloween, there were many Mexican candies to taste and sample like Rebanaditas, which are gummy watermelon lollipops coated in chili powder.

Sophomore Kimberly Mendoza said, “I found it really interesting how they captured all the flavors of Mexico in one night.”

As students enjoyed traditional Mexican food, they could also play games like 100 Mexicanos Dijeron and Lotería. The concept of 100 Mexicanos Dijeron is similar to Family Feud, where teams try to match their answer with the most popular survey result. Lotería is a game of chance, similar to American bingo, where the first person to fill all 16 spaces on their card wins. The cards depict characters and symbols historically essential to Mexican culture such as the mermaid, the skull, the rooster and the moon.

After a few rounds of Lotería, freshman Dionaisy Caceres explained, “I wanted to learn more about it because I have a lot of Mexican friends.”

Following the food and games, students took the stage for Lambda Theta Pi’s sixth Spanish spelling bee. The words were given to the participants in Spanish, but they had the option of spelling the words using English or Spanish letters.

“I find it cool because I feel like there’s not a lot of culture on campus. It’s nice to know people care to learn about different cultures,” said freshman Karen Lara.

All of the participants made it through the first few rounds, spelling commonly used words such as amigo, alegra and álbum. Participants were slowly eliminated as the words became more challenging (e.g., filosófico, inyección, inspiración) in rounds five and six. The final round came down to Nathalia Marius and Alexa Sena.

Marius, a senior, was awarded the trophy after spelling esquizofrenia correctly. Although Marius speaks Spanish fluently, she explained it’s not every day that you need to spell out a tricky word like esquizofrenia or electrostático.

Marius added, “I feel like because we never spell in Spanish, it’s mad hard. We go years without spelling.”