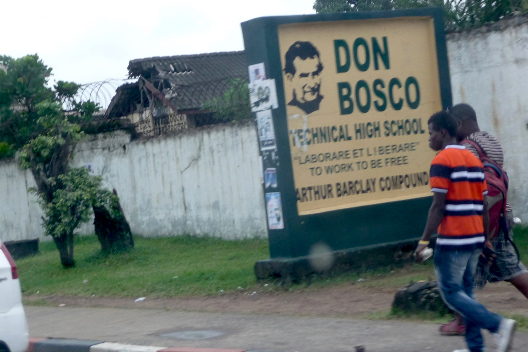 Associate professor Karl Johnson shared his experience traveling to Africa this past summer in a presentation titled, “Liberia: An African Nation of Wonder and Promise.”

Johnson, who teaches African American Studies at Ramapo, talked on Monday about the11 days he spent in Liberia over the summer at the event hosted by the Culture Club and the Liberian Studies Association.

“We know all about the negative perceptions of Africa, but every time I go to Africa it never fits what we see,” said Johnson, “So, when I first went, I was expecting people desperate and running at me at the airport. It was the complete opposite. When I went there, all I saw was a beautiful land with people striving to do their best.”

Liberia is a small nation, Johnson compared its size to that of South Carolina, and is located near Sierra Leone, Guinea and Cote d’Ivoire. It is an incredibly young nation, with more than 60 percent of the population under the age of 25.

“Where I visited is Monrovia, the capital. Monrovia is named after U.S. President James Monroe, believe it or not. I did travel outside Monrovia into the suburbs,” he said.

Johnson showed the Liberian flag, which has an eerie resemblance to the American flag, with 11 red and white stripes and a blue corner with a single star. However, this similarity is no coincidence, as the history of the two countries is deeply intertwined.

“Liberia was started by freed slaves from the United States,” he explained. “It began as a modern nation in 1822 and by 1847, the Americo-Liberians established a republic. They followed the pattern of the United States.”

This relationship affects the country to this day. Liberia’s official language is English and 85 percent of the population follows Christianity.

“[The African Colonial Society] played a role in establishing Liberia as well, sending freed slaves to Liberia,” he said, going on to explain the thought process of Americans at the time. “The issue was always that it’s very difficult to maintain slavery when there were free people walking around. You have free people walking around and it gives slaves the idea that they can be free.”

Going through the list of Liberian presidents, which included William Tubman and Charles Taylor, Johnson pointed out how American their names sounded. Notable presidents include Samuel Doe, the first indigenous president, and Joseph Roberts, the first former slave to be president.

“The current president is Ellen Johnson Sirleaf,” he said. “She’s a woman president and that’s rare.”

Johnson went on to discuss other similarities Liberia has to America, including the fact that, despite having their own currency, they frequently use American dollars.

However, Liberia also has many problems of its own.

“Liberia is not one of the richest countries, Ghana is much, much more rich,” he said.

The unemployment rate in Liberia is only 2.8 percent, but Johnson argued that this is due to a lack of people.

“Usually in poorer nations, the unemployment rate is very high,” he said. “I think they need more people. The GDP, which is how much a family or individual brings in each year, is 900 U.S. dollars, which is between 2 to 3 U.S. dollars a day.”

He also shared various images he took during his trip, which included cars, fashion and infrastructure similar to America.

“If I wasn’t telling you that this was Liberia, you would probably think that is was a city here in America. It just does not match our perceptions of a very poor country,” he said.

One picture even showed that Liberia has a Don Bosco High School, which Johnson joked looks like it was taken right here in Mahwah.

At the end of his presentation, he questioned the audience to think about what or who caused people to fear Africa, saying that most Americans are afraid to even attempt to visit.

“I’m not arguing that every country in Africa is perfect,” he concluded, “but our perceptions of them is so distorted.”