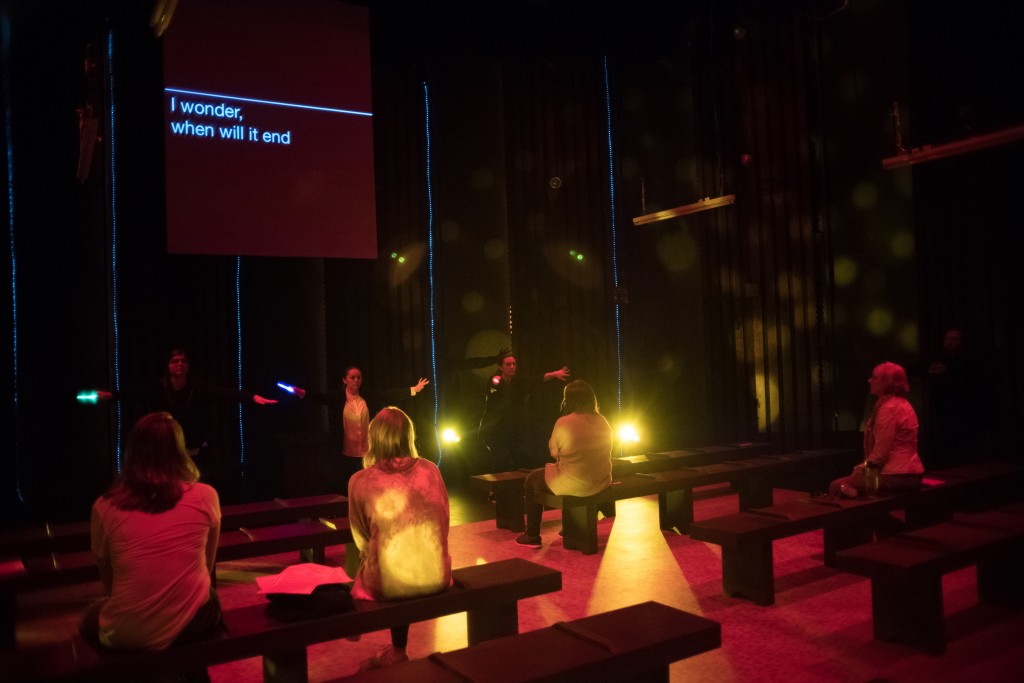 The new Ramapo production of “The Sonic Life of a Giant Tortoise,” a student-performed rendition of Japanese playwright Toshiki Okada’s 2011 play, is moving into its second and final week onstage in the Berrie Center’s Adler Theater.

The production stars five nameless characters dressed in black who address one another with twisting, looping phraseology that defies easy interpretation. Director Peter Campbell, an associate professor of theater on campus, views the highly experimental play as an abstract meditation on “the performance of everyday life.”

“This is a show that expresses that idea in an exaggerated theatrical form,” Campbell said a week before opening night. “These are actors who only talk about their dreams, what they want to do, what the difference is between enjoying your everyday life and wanting to do something different.”

Campbell’s passion in producing Okada’s play grew out of an interest in Butoh, a form of contemporary Japanese dance in the aftermath of World War II as a response to the atomic bombings of Nagasaki and Hiroshima. Butoh’s prioritization of gesture and movement over text led Campbell to the work of Okada and the playwright’s theater company, chelfitch.

“They use a gestural language that they create for each production,” said Campbell, “and I was interested in working in a non-naturalistic, nontheatrical language I would get to create with the actors.”

The influence of Okada and chelfitch on Campbell’s production is clear: His actors are often stationary, rooted to one point on the stage floor while speaking and emoting through gesture.

Actors Amanda Steuernagel and Ronnie Roszkowski discussed the production in the Berrie Center’s greenroom following its opening performance last Friday night. According to Roszkowski, a senior theater major, a collaborative spirit dominated the creative process behind the production.

“Especially in regard to the gestures that you see throughout the show. They were created organically together with the director,” said Roszkowski, “and those movements became a central part of the production.”

Steuernagel, a junior double major in theater and global communication, also served as the production’s dramaturge, researching Okada and the history of his play. Her work helped her contextualize Okada’s unusual style.

“His text is meant to be broken up and meant follow a thought process,” she said, “In Japanese syntax they tend to tell the subject at the end of a piece, and Okada plays with that.”

Steuernagel then tackled the illusive nature of the play’s meaning: “It’s hard to define in this piece because it’s so abstract and nonlinear, but it’s a story about finding ourselves.”

The actors are conscious of the piece’s unconventionality. Roszkowski was initially concerned that the abstractions of “The Sonic Life” would inhibit its ability to connect with audiences, but says those fears were quickly allayed.

“As it progresses, you begin putting the pieces together until you can say, okay, this is the gist of what is going on,” he said, “But I think as long as you are giving something you’re not used to a chance and actively trying to understand it, I think you’ll be able to follow along with it.”