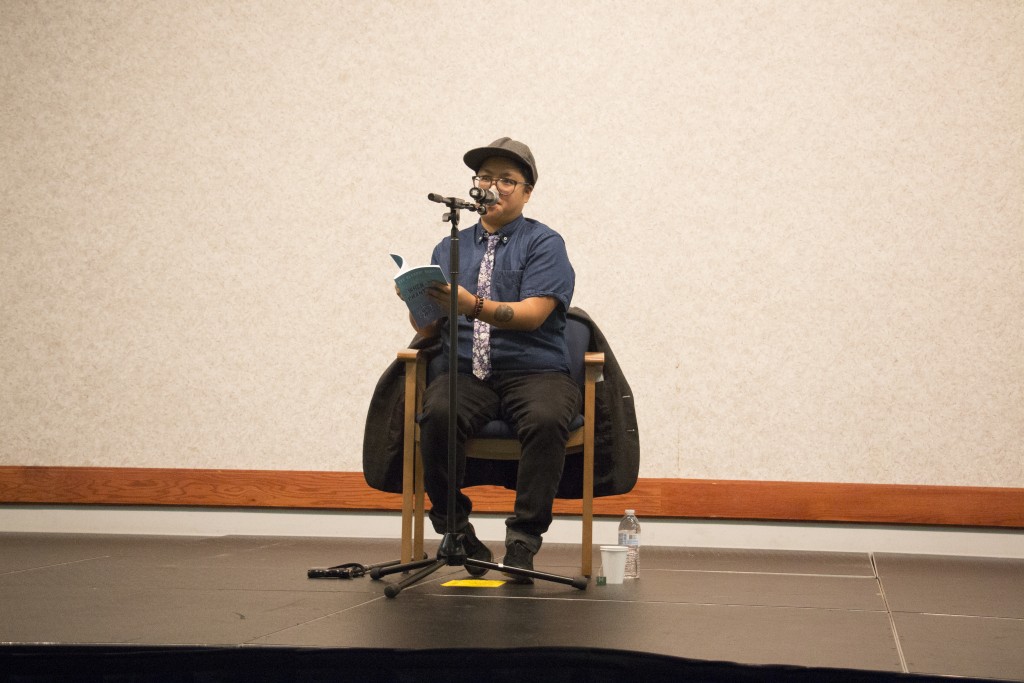 October marked the celebration of Queer and Trans History Month, Disability Awareness Month and Filipino American History Month. To signify the month’s ending, the Women’s Center invited Kay Ulanday Barrett as the Keynote Speaker to speak on behalf of all three communities this past Wednesday.

According to his website, Barrett is a “poet, performer, and educator, navigating life as a disabled pin@y-amerikan transgender queer in the U.S. with struggle, resistance and laughter.” While at Ramapo, Barrett read his original poetry, all of which related to his identity as well as the oppression he has faced due to his identity.

Barrett began his poetry reading by requesting that the audience “think of one person that needs a little extra love.” He noted that it is a hard and dangerous world, especially for minorities, and that people “need some extra tenderness.” His poetry reflected this statement, as he spoke to issues revolving around those who are classified as different than the white, cis American norm.

After reading a few poems, Barrett spoke to the fact that he identifies with SDQ, or sick disabled and queer people. This led him into his next poem which was a compilation of hurtful and oppressive things he has heard people say because of these labels. The poem consisted of microaggressions and blatant ignorance. Lines like “He doesn’t even look disabled” and “Wait you’re supposed to be a girl?” displayed the day to day battle some people face simply for being themselves.

Despite the oppression Barrett has had to face, he remains strong, comedic and proud of who he is.

“I am the queerest, wobbliest, brownest kid you’ll ever meet,” he said in between his readings.

Barrett resists the negative associations that society places on these labels, and instead wears them proudly. In one of his poems, he says, “I know what it is to be broken and bold.” These words speak to Barrett’s character; he has struggled, but he is still strong.

Barrett closed on what he called “the obligatory trans poem.” In this poem, he discussed how using the bathroom is a difficult task for those who are transgender due to society’s unnecessary need to arbitrarily label everything. Bathrooms thereby become another way of oppressing an already marginalized group of people who should be entitled to something as simple as a place to use the restroom. In the poem, Barrett asked, “Am I real?” which emphasized the fact that by denying transgender people the right to use their preferred bathroom, society has also denied their identity.

After Barrett concluded his readings, a Q&A took place. Barrett answered questions ranging from his tattoos to the struggles of getting published as someone who is transgender, queer and not white. Once Barrett answered everyone’s questions, attendees were able to grab food and refreshments, or speak to Barrett individually.

“It was an incredibly hard-hitting and talented performance,” said junior Fin Lumino after the event.

The Women’s Center's health and wellness coordinator, junior Regina Cuddeback, said, “Kay closes the month on a very strong note and I'm very thankful that he came and performed.”