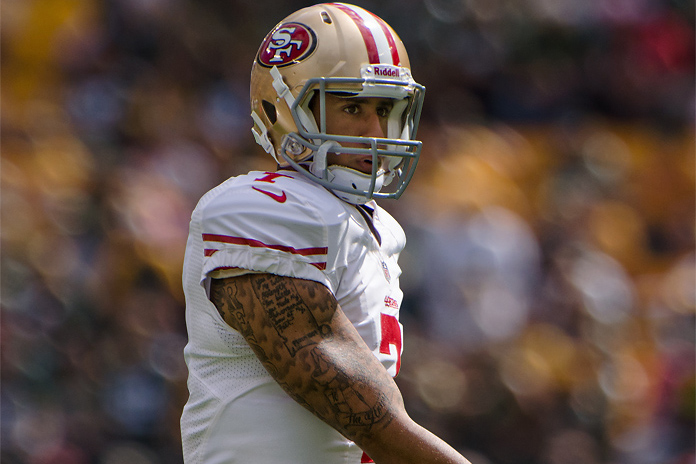 Colin Kaepernick steps, or in this case kneels, back into the spotlight this week, as he has filed a grievance against NFL owners for being kept out of the league.

Kaepernick, known for his iconic kneeling protest against the national anthem last season, is also facing other challenges, particularly in the press.

Throughout the 2016 season, his last in the NFL, Kaepernick took heat for his decision to wear socks depicting police officers as pigs. Later on in the season, he faced ridicule in a t-shirt worn to a press conference showing Fidel Castro. If Kaepernick were to not have worn the articles of clothing publicly, his chances of getting hired would certainly be increased.

Legally, Kaepernick is in the clear, as his choices in clothing are a form of freedom of expression. In a quote from the Guardian, Kaepernick stated, “I wore these socks, in the past, because the rogue cops that are allowed to hold positions in police departments not only put the community in danger, but also put the cops that have the right intentions in danger by creating an environment of tension and mistrust.”

Almost a year later, still unemployed, Kaepernick claims that the NFL is colluding against him to keep him out of the league. As teams bring in players with lesser stats and less experience, there is a building controversy over not signing Kaepernick.

Kaepernick’s legal team claims to be reviewing phone calls and emails exchanged with team executives and leaders. This could include teams that signed quarterbacks with lesser statistics, like the Packers and Titans, or even teams that have officials who have relationships with Donald Trump, including the Patriots and Cowboys, according to CBS Sports.

With no proof that team owners coordinated to keep him out of the league, Kaepernick will be faced with his biggest challenge yet. For Kaepernick to be successful in his case, he and his team of lawyers will have to dig for any sign of evidence showing collusion between any teams that potentially could have signed him.

Kaepernick’s actions speak for themselves since many of his notable motions have been acts of protest against police brutality and racism. President Trump’s commentary on the issue last month brought many former teammates and players to support Kaepernick’s notion in protest as well.

It is obvious that teams are against hiring the star quarterback, especially with teams like the Packers and the Titans suffering losses in injuries. For now, Kaepernick must hang tight.