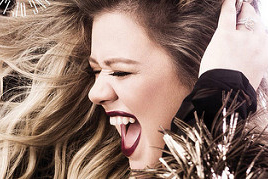 Kelly Clarkson just released her latest album, “Meaning of Life,” on Oct. 27. Clarkson announced on Sept. 6 she would be dropping the album, then the following day surprised her fans with two songs, “Love So Soft” and “Move You.”

From “Love So Soft,” listeners get the funky side of Clarkson with a song that listeners can jam out to with their friends. In the song, she talks about keeping her guard up but also being open to having fun with someone. In comparison “Move You” is reminiscent of the old Kelly Clarkson as a more heart-felt, lyrical song. Although the song is repetitive, at the same time it is extremely intense. The examples she makes in the song are what resonate with listeners. For example, when she says, “Like a soldier who is falling, as he holds his country’s flag/And he fights for freedom’s calling/I wanna move you like that.” I know that hits home for many of her fans, as it is an intense line where one can feel how much emotion she put into the song.

When listening to the album for the first time, one may be disappointed rather than excited because older songs like “Break Away” had set the bar high. One expected more songs with a slow beat to them and lyrics I could relate to more easily. As she is now older, one would think Clarkson would make songs with more of a backstory to them like about her experiences and her achievements.

“I like all of the rhythms and beats to it but it kind of sounds like she is screaming in some of the songs instead of singing,” said Samantha Boyne, sophomore. “Most of the songs are catchy, it is the type of album that you need to listen to a couple of times to really like it and enjoy all of the songs. I have been obsessed with her for a while but this is not her best work.”

Although some fans are not particularly thrilled with the album, she has gained fans who do enjoy the album. Sabrina Iudici, junior, said, “I have always seen Kelly Clarkson as America’s sweetheart, but in this album she lashes out and gives a different genre a try and I think it really does sound good. I even played the album on a long ride and learned to appreciate it.”

Whether she has gained new fans or disappointed a few, Clarkson is still in the spotlight as she has many people talking about the album, which helps her with marketing the album itself. Ultimately, it can lead to helping Kelly Clarkson set direction in her career once again.