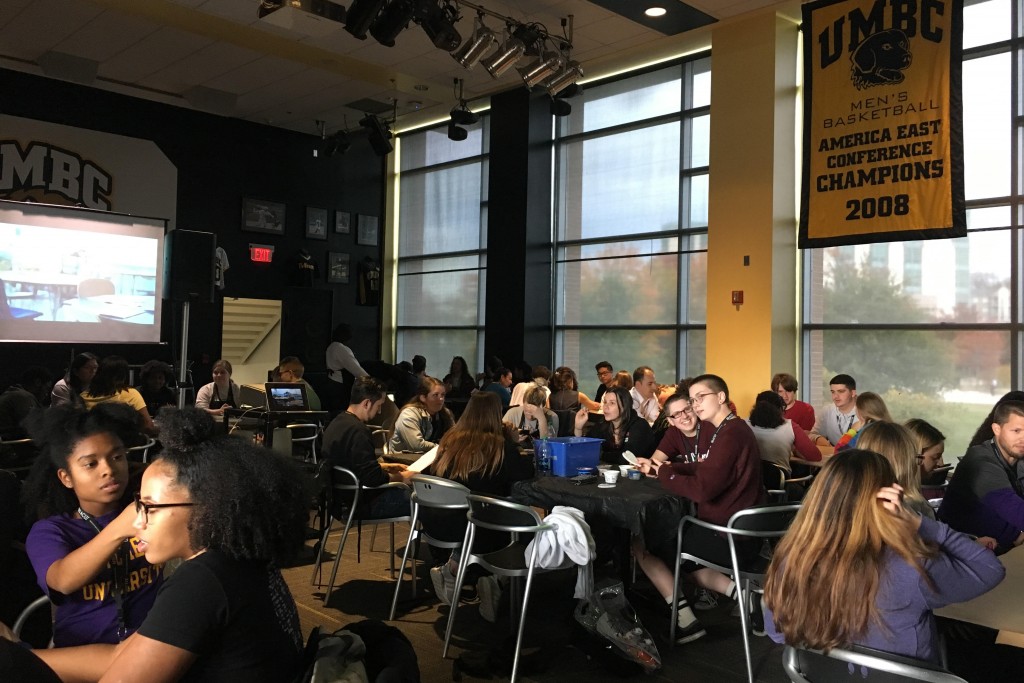 Members of the Ramapo College Student Government Association attended the annual ACUI VII Conference in Baltimore, Maryland this weekend. The group participated in a multitude of leadership panels, workshops and “conversessions” to learn more about progressive education, training and research in college unions and student activities.

Founded in 1914, The Association of Colleges and Universities International, or ACUI, is a nonprofit educational organization that brings together professionals from hundreds of schools in seven countries. The association is joined by thousands of campus community builders around the world. Primarily focused on the work of those within the college unions and student activities field, ACUI strives to provide an inclusive, welcoming community.

Following World War II, as college enrollments surged, college unions were built to meet students’ diverse and co-curricular needs. ACUI began holding seminars and regional programs to reach its expanding membership and educate campus leaders with the organization’s core values: unconditional human worth, joy, learning, caring community, innovation, diversity and integrity. It even had an architect available for consultation as institutions constructed new facilities. In 1969, ACUI hired its first paid staff member and established an office at Stanford University. In the 2000s, ACUI reinvented itself as a knowledge-based organization and developed core competencies. Today, ACUI is a nonprofit organization headquartered in Bloomington, Indiana.

From Nov. 3 through Nov. 5, conference-goers attended workshops and break-out sessions about a wide variety of topics, including but not limited to mental health first aid, marketing strategies and free speech on campus.

At the “Discover Your Marketing Anthem” breakout session, an administrator from Penn State University spoke about the marketing strategies she implements at her campus and shared information and resources for marketing and promotion on other college campuses. The workshop leader shared a story about an anti-rape campaign facilitated by individuals at Eastern Michigan University. At the university, urinal splatter guards imprinted with the inscription “You hold the power to stop rape in your hand” were placed anonymously in bathrooms across campus.

The campaign caught the immediate attention of men using the bathrooms, as well as college administrators and the media. While the message on the urinals might be considered radical by some, the marketing campaign was still effective because of the reactive and engaged discussion that followed the placement of the guards.

Radical marketing techniques are becoming more common in the growing information age as advertising becomes an increasingly competitive field. As technology continues to evolve and students become more distracted with multiple forms of communication, it has become crucial for college administrators to effectively and efficiently get their messages across to the student body about campus events and programs.

Conference attendees also had the opportunity to work on a hands-on service project with the nonprofit organization Art With a Heart. Art With A Heart brings interactive visual arts classes into schools, community centers, group homes, shelters, permanent housing facilities, hospitals and senior housing facilities for those living in Baltimore’s most vulnerable communities. Ramapo College students who attended the conference participated in the service project, where they worked on finishing various art projects which would later be hung as decoration in local elementary schools.

On the final night of the conference, all attendees were invited to a ceremonial banquet to celebrate the achievements of outstanding ACUI members in the past year. The tables were decorated with crab-themed centerpieces and crab cakes were served along with Maryland sweet tea and chocolate cake for dessert. The conference finished out with a live auction led by a professional auctioneer, and the fundraising grand total for the weekend was $5,064. This money goes toward funding annual events and scholarships the organization offers.

Mike MacStudy, Ramapo College’s coordinator for commuter affairs, was the advisor of the trip.