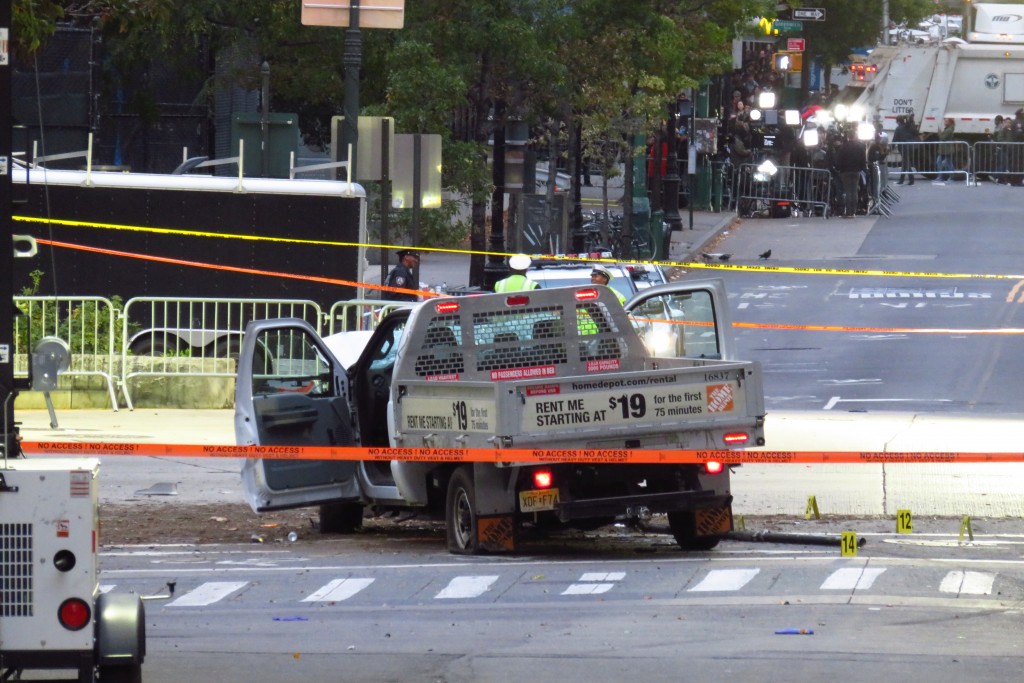 On the afternoon of Oct. 31, 2017, a man drove a rented Home Depot pickup truck down a busy bicycle path in Lower Manhattan overlooking the Hudson River.

Eight people were killed and another dozen injured during the attack. The driver has been identified as Sayfullo Habibullaevic Saipov of Uzbekistan, 32, who has been living in the U.S. since 2010 and recently residing in the city of Paterson, New Jersey.

CNN reported that a senior law enforcement official stated that “authorities found a note claiming the attack was made in the name of ISIS near the truck used in the attack.” New York Mayor Bill de Blasio responded to CNN, “This was an act of terror, and a particularly cowardly act of terror.”

It has become increasingly common for vehicles to be used as weapons for carrying out terrorist attacks. This has been seen recently in London, Spain, Germany, Stockholm and Nice, France where a truck drove straight through a large crowd killing 86 pedestrians.

Following the initial attack, Saipov drove for several more blocks before crashing into a school bus. CNN wrote, “The suspect left the vehicle while displaying imitation firearms and was shot in the abdomen by a police officer, according to the NYPD.”

Saipov is expected to survive his injuries, allowing for further investigation to continue regarding whether he appears to be an inspired “lone wolf” or direct member of a larger organization. As of now, law enforcement believe the attacker to have acted individually.

Back in Washington, President Donald Trump had issued to congress a third travel ban which was to be put into effect a day before the attack. The ban would target people from Iran, Libya, Syria, Yemen, Somalia, Chad and North Korea. However, the New York Times reports a federal judge in Hawaii issued a nationwide freeze on implementation, halting the ban for the time being.

Immediately following the attack in Manhattan, Trump took no time to use the tragedy as fuel to convince the public of the necessity for his proposed travel ban. The president tweeted that night, “I have just ordered Homeland Security to step up our already Extreme Vetting Program. Being politically correct is fine, but not for this!”

President Trump and his administration understand that this is a delicate time for many, yet also comprehend that such vulnerability could bring forth the passing of their proposed travel ban. Using the American public’s fear to his advantage is one strategy that could possibly pan out for Trump. The White House is using this event as a platform to push their agenda.

Despite rhetoric coming from the Trump administration, I do not believe the travel ban will prevent terrorist attacks from occurring on U.S. soil. As mentioned by Newsweek, Uzbekistan had not been one of the countries included in any of Trump’s previous bans.

Action must be taken, but isolating certain parts of the world will only place a stronger distaste for Americans in citizens from those nations, foreign and domestic.