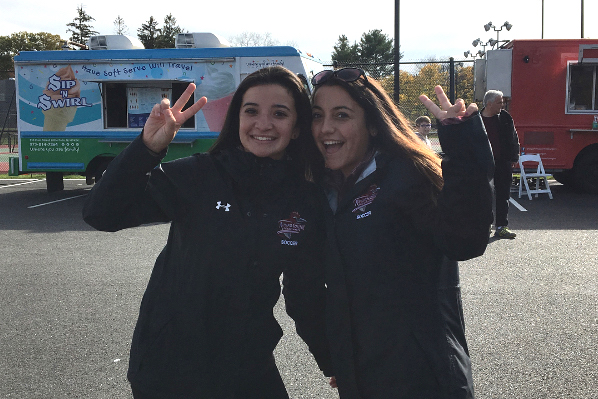 The fundraiser appeared to be a huge success and an enjoyable day. Partly cloudy with cool tempteratures, it was the perfect fall weather for students, parents, families and friends to enjoy the food and activities outdoors.

All attendees were given two raffle tickets to win 12 tickets to a suit for a Rockland Boulders game, valued at $500, as well as four tickets to a New York Red Bull’s game for the 2018 season donated by the team.

The most popular food trucks with a steady line of customers appeared to be Taco Shelly’s, Callahan’s Hot Dogs and Sip and Swirl. Sip and Swirl was especially popular with the young children, as children were often seen walking around with ice cream cones or begging their parents to buy them ice cream.

The fundraiser was organized by Samantha Hirsch, the assistant coach of the women’s soccer team. All proceeds will go toward the improvement of team operations.

“We are trying to raise funds for our team, to buy equipment, clothing, for anything extra we need for the team. We are planning to go on a trip and we can use the money for that,” said Hirsch.

The team worked together, running the ticket stands, water stands and various activities.

“All of the players are working today to help with the event”, Hirsch said. “They helped to promote it, [and] actually, one of our players introduced us to the person who got all the food trucks.”

The fundraiser was originally scheduled for Sunday, Oct. 29, but was rescheduled due to the expected heavy rainfall.