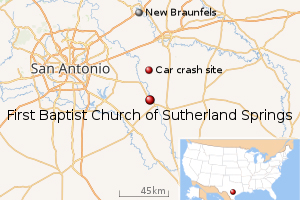 With the latest mass shooting taking place in Sutherland Springs, Texas, it is important now more than ever to discuss the problem with domestic abusers owning firearms. As is the case with other mass shootings, the gun lobbyists are quick to express their sympathy and offer their condolences, while they continue to pass laws that allow for less regulation on gun ownership.

There is legislation in place that bans assault weapons from being sold in New Jersey, and Gov. Chris Christie signed policies that would limit access to firearms for people under restraining orders or convicted of domestic violence offenses. However, as we’ve seen with Orlando, Las Vegas and now Sutherland Springs, these guns are modified. There is no legislation in place to ban the modification kits for these rifles.

Accessibility to guns is easier than it has ever been. An AR-15 in its most basic form costs less than the average smartphone. In fact, on Atlantic Firearms’ website you can purchase an AR-15 for as little at $549. When’s the last time news headlines read, “Man holds woman hostage with iPhone 8”? Although this is a comical way of addressing the topic, it puts the amount of money required into perspective.

The big problem with the AR-15 is its ability to be modified so easily. In its stock form, it is a semi-automatic rifle. Like an old muscle car though, a few bolts here, a tweak there, and the end result is something more akin to a fully automatic weapon capable of killing multiple people in seconds.

In a majority of cases across the country, it is easier to purchase an AR-15, the mass shooting weapon of choice, than it is to purchase a car. In 32 out of 50 states, one can purchase a gun through what is known as the “gun show loophole.” This loophole allows for firearms to be sold through private sellers without a background check; only the licensed dealers need to undergo thorough background checks.

What we are left with is a system that is not federally mandated across the country. There is nothing stopping a person in Pennsylvania from purchasing a semi-automatic rifle with the proper paperwork, modifying it, then driving across state borders and shooting someone in New Jersey. Today’s gun laws should not be unique to each state. There should be a universal series of laws that apply to the country as a whole.

Firearms should also be actively inspected and registered. There should be legislation in place to track the modifications of guns. In fact, it should be required to have a permit to be able to modify firearms. Furthermore, there needs to be a universal set of laws that applies to all guns. Long guns such as rifles have different rules than handguns and this should not be the case. All guns can pose a threat, so to treat guns differently in the eye of the law is ridiculous.

There are many different ways to tackle gun control.

Banning specific individuals from owning guns is one way, but the problem are the guns themselves.

The first step would be a nationwide ban on assault weapons and modification kits for semi-automatic weaponry, such as bump stocks, that convert those weapons into fully automatic.

Banning assault weapons, combined with a universal series of laws put in place, has the potential to make America a better place.

The time to act is now. We need to address the topic of gun control now before more innocent Americans lose their lives.