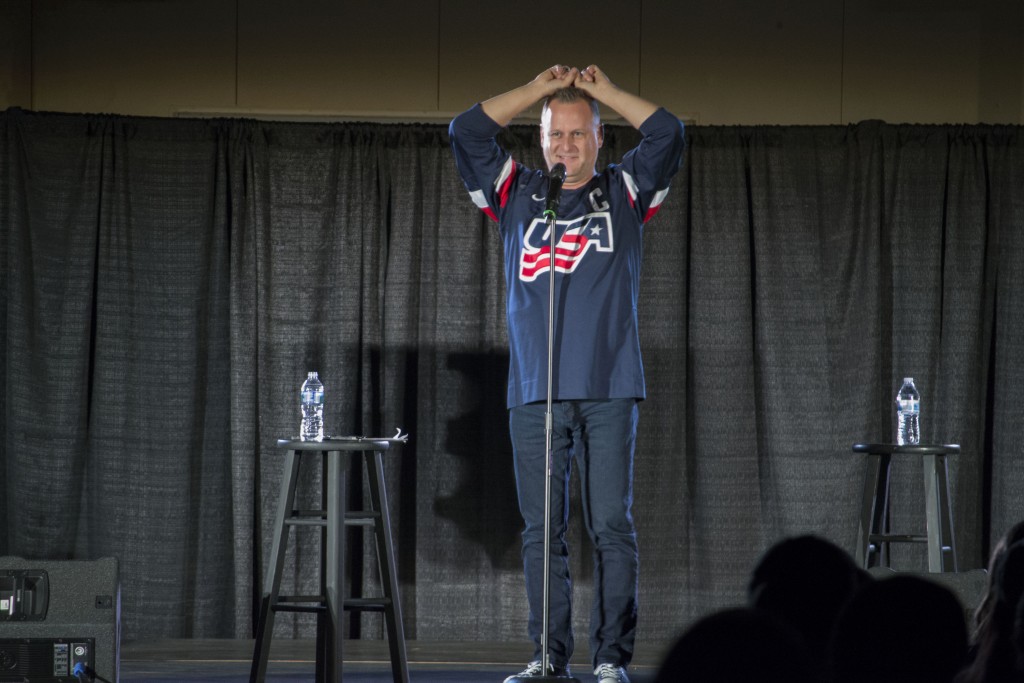 The College Programming Board (CPB) hosted the Fall Comedy Show in the Bradley Center’s auxiliary gymnasium on Saturday night, welcoming Dave Coulier to the stage. Coulier, best known for his role as Uncle Joey on “Full House,” brought a sense of nostalgia to the crowd.

Before Coulier took to the stage, the opening act, Ramapo alumnus Warren Dolan, warmed up the crowd. Dolan had the audience laughing throughout his entire set with jokes about the latest movies, people calling their grandparents strange nicknames and his short-lived career as a football coach after binge watching “Friday Night Lights.”

Lauren Brereton, senior, commented, “I thought it was great that they [CPB] chose an alumni as the opener, it was a nice and unexpected touch.”

Coulier soon after was welcomed to the stage by an uproar of applause from the audience to which he replied, “Alright, I’m not John Stamos, relax.”

He spent the first part of his set reflecting on the 192-episode run of “Full House” and the current reprise on Netflix, “Fuller House.” To the audience’s enjoyment, he reenacted his famous “Cut it out” catch-phrase, his sidekick Mr. Woodchuck’s voice and other well-known impressions such as Spongebob Squarepants, Patrick Star, Shaggy and Scooby-Doo.

Monica Bubelo, senior, shared, “Seeing David Coulier felt surreal. It fulfilled every expectation I had and I really enjoyed seeing him live. Hearing him say, ‘Cut it out’ really was the cherry on top of a great show.”

Coulier’s set included personal anecdotes from his childhood, memories about raising his son and his love for sports, as he was wearing a custom-made Team USA hockey jersey.

The gymnasium grew especially silent when he began to speak about how much money he makes in residuals whenever “Full House” is played around the world. He went on to say that it was enough to buy a new T-shirt once a week for the rest of his life – a long sleeve if he really wanted.

Toward the end of his performance, Coulier shared that he is constantly inspired by the generation who grew up watching “Full House.” He went on to say that the generation as a whole are smart, confident and most importantly kind to one another, which is something he feels his generation is unfortunately lacking.

When asked about his short-lived college experience, Coulier noted, “College can tell you what it might be like, the world will tell you exactly what it’s like. And for me that’s what I wanted, I wanted that experience at 19 years old. For me and what I do for a living there was no school for that, it was called life you know?”

To the audiences’ surprise, Coulier ended his act with an impressive harmonica performance. The end of his set also marked the final show of Coulier’s 2017 college tour.

The night seemed to be a great success as the crowd remained enthusiastic throughout the duration of the performances.

Jacob Fishman, president of CPB, commented, “This was one of the best events I have ever had the pleasure of working on and I’m super fortunate for being able to be a part of this club. I’m grateful that I can help bring events like this to the greater good of campus.”