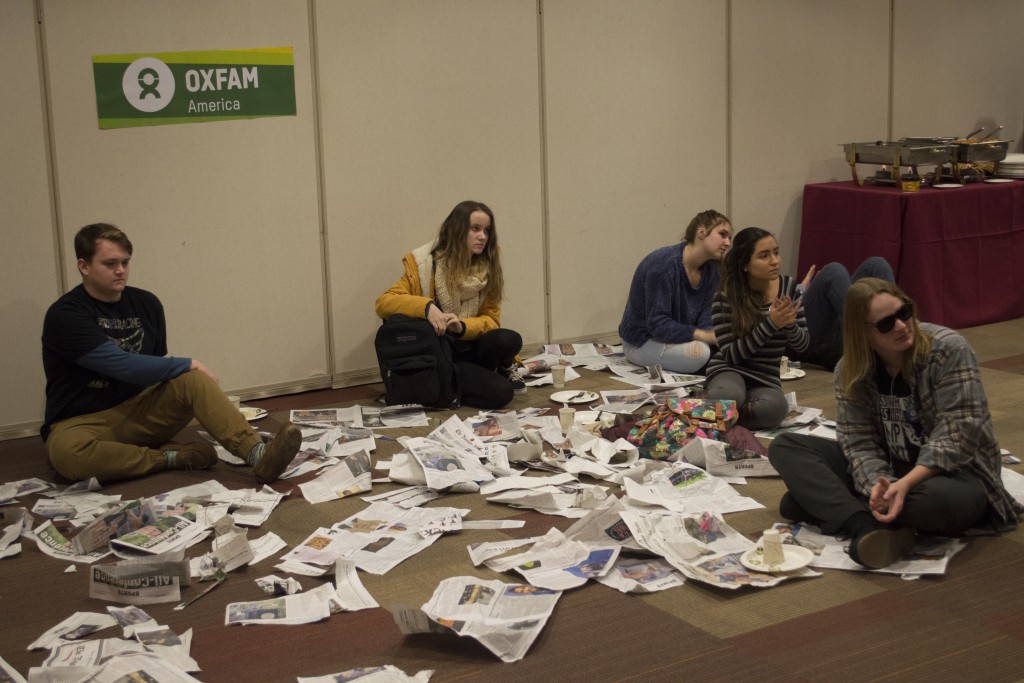 Hosted in the Alumni Lounges by the Civic and Community Engagement Center, the Oxfam Hunger Banquet was the capstone event of Hunger and Homelessness Awareness Week and set out to bring awareness about poverty and hunger.

Using three different areas, the banquet highlighted the differences between classes through the place settings and food served, and utilized discussion following the demonstration to engage in the participants’ thoughts on what they just experienced.

The event unfolded with people being given cards with a summary about a person on their card, as well as whether that person was in a high-income, middle-income or low-income class. Those in the high-income class were served food first and had the widest variety of options to choose from, while those in the middle-income and low-income class had one or two options of food and neither were enough supplement according to the recommended calorie intake that people should be getting.

While this was occurring, the discrepancies between class, food and its relation to privilege was being explored by two members of the CCEC, Gabby Bok and Antonio Navazio.

“This event is a metaphor for how food and other resources are inequitably distributed in the world,” Navazio stated. It was a dining experience attached to a presentation lecture, in order to bring the actual events of that night to life, explained.

There are millions of people who do not have adequate access to the food they need and being able to have the experience from three different perspectives across the evening opened up the discussion.

In terms of class, “more often than not, people will move down than up,” remarked Dahiana Arenas, who was seated in the low-income section. “It was unfortunate, seeing unequal distribution, and how the low-income class only had a few bits of rice.”

In comparison, the high-income table was given a full course meal.

“​Just having to sit on the floor versus the table, it went beyond food. It helped conceptualize the systematic issue, and definitely pushes you to find out more ways to help,” said Aine Cullen, another participant in the low-income class.

Nicole Aellis, a participant who sat at the high-income table said, “It made me feel bad, selfish, because I can’t give [the lower-income classes] anything. I didn’t do anything to earn this. It was my privilege that got me this.”

Allowing people to recognize their affluence and privilege was a key moment in the banquet. Having people openly discuss how this may impact them and the life of others is necessary to solving hunger issues and poverty across the globe.

“Everybody deserves to be lifted up, and what can we do with feeling bad about somebody or a situation and working together to lift everybody up?” posed Karen Booth, the assistant director of civic engagement. It is something all people should consider when they think of this issue and how it may be solved in the future.