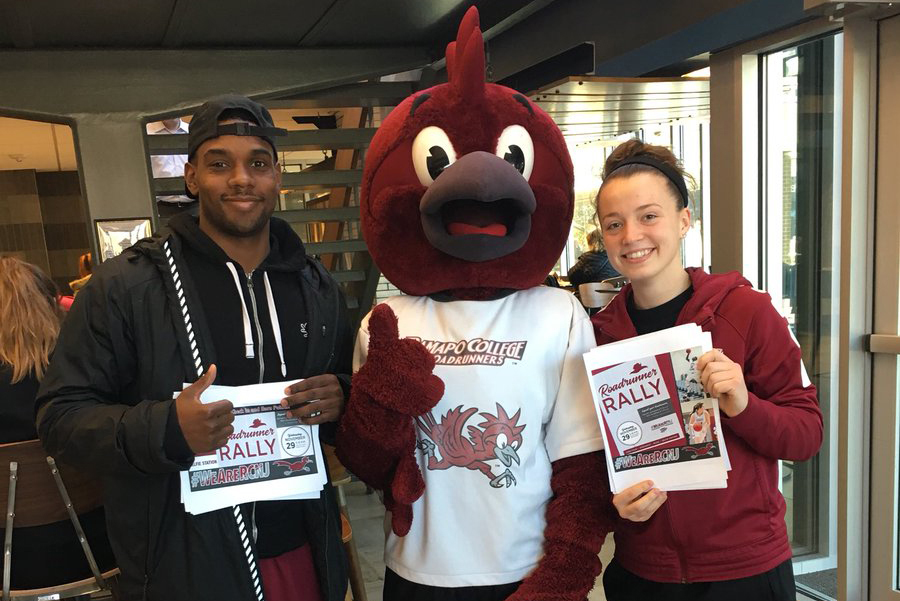 The Roadrunners faced off in their second NJAC matchup Wednesday night against the Montclair State University Red Hawks. Ramapo kicked off the night with the Roadrunner Rally in the Bradley Center. The rally included free food, giveaways, and much more to celebrate and excite fans for Ramapo’s basketball teams.

“It was really fun and I’m glad I went,” said senior Ramapo lacrosse goalie, Monica Bubello. “There was a DJ, a selfie station with cute props and free prizes and giveaways like T-shirts. They also had a drink station, a mac and cheese bar, wings and an do-it-yourself ice cream table filled with a variety of different flavors and toppings. There were tons of students and athletes who came out to support and it was a cool way to hype up the basketball games.”

The Lady Roadrunners kicked things off against the nationally ranked Lady Red Hawks. Ramapo entered the game on a four-game losing streak but looked to rebound against their NJAC rival. Ramapo started off hot scoring the first 4 points of the game,

which forced Montclair State to call an early timeout.

After the timeout, Ramapo couldn’t handle Montclair’s game plan. Montclair outscored Ramapo in every quarter besides the 4th. There were bright spots for the Roadrunners as Jina Crawford dropped 13 points on 6-10 shooting from the field.  Crawford has become a magician around the rim with some of her acrobat finishes. As a team, Ramapo shot 76.2 percent from the free throw line. The opportunities were there for Ramapo as they hung rather well with Montclair. Unfortunately, Ramapo dropped to 2-4 on the season after a 69-52 loss.

The nightcap was for the Men’s basketball teams to compete. Both teams entered the game 1-0 in the conference and one loss each overall. Ramapo and Montclair had a heated battle last season as both teams pushed each other to the limit.  The game started very slow as only five points were scored in the first three minutes. Ramapo missed nine three-point shots in the first half as Montclair State stayed relevant as their six three-pointers kept them in the game.

Ramapo ended the first half on a positive with a pulled up jumper by Christopher Mosley but the team wasn’t happy with their performance. Adjustments needed to be made during halftime for the Roadrunners. Point guard, James Long shared what the game plan was coming out for the second half.

“At halftime, we kept emphasizing rebounding both offensively and defensively so that was the main thing. Offensively, we wanted to keep running out stuff and continue to take good shots. I thought our defensive was key to the second half.”

The Ramapo defense stepped up limiting the Red Hawks to 26.7% from the field. The long ball wasn’t working for Montclair either as Ramapo closed out on their shots to make them shoot 11.8 percent from deep. Red Hawks could only muster 24 points in the second half.

The Roadrunners had three players in double digits. The scoring was led by Christopher Mosley(18), Patrick Peterson(16), and Nick Stanek (11). The old adage says “defense leads to offense” and it worked for the Roadrunners who ended up with the 70-56 win. Ramapo will travel down to Stockton University this Saturday for an NJAC matchup.