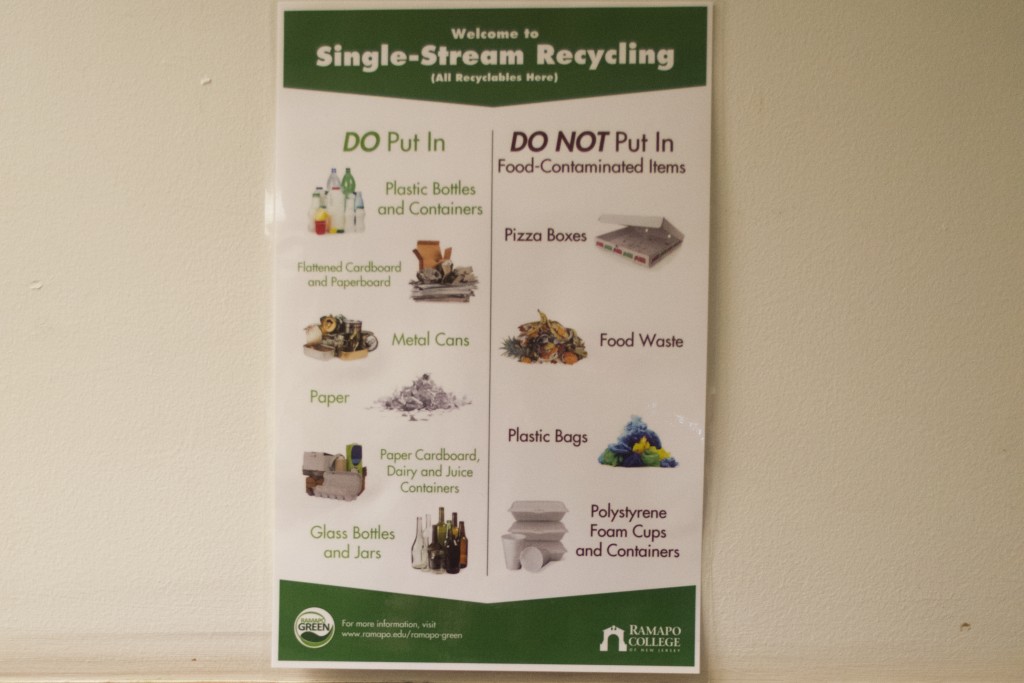 Over the past three weeks, a group of students and faculty have been conducting a waste audit across campus in order to establish a baseline date of how much trash and recycling the campus produces.

“The College’s strategic plan has in it a goal of increasing recycling by 25 percent by 2020, but we have no data,” said Ashwani Vasishth, World Sustainability professor. “We don’t how much we recycle, we don’t know how much we can recycle. The purpose of the audit was to get a baseline number.”

Vasishth helped to organize the project, but much of the work consisting of collecting and sorting the waste is done by student volunteers. Xx classrooms with 20 or more seats in them were randomly selected across campus to be used in the statistical study.

“Every day of the week, from 9:30 to 10:30 in the evening we have teams of students that fan out across the campus that grab the trash bags and recycling from each of the classrooms that we selected and take them to the parking garage,” Vasishth explained. “The next day at noon, we get a different team of students to go to that space, rip the bags apart and audit the trash.”

What the audit is looking for goes beyond just the percentage of recyclable items being placed in the trash, but also the types of items students commonly place in the wrong bins, along with the number of plastic water bottles our campus uses.

Based on these findings, Vasishth hopes to be able to improve education and signage around campus to help students know what waste goes into their respective bins. Currently, there are already new flyers posted in every classroom listing what can be recycled and what cannot.

“We know from other places that have tried doing this that we could easily go up to between 50 and 75 percent recycling,” he said. “We could go that high, but it would require a culture change on campus.”

Cross-contamination and educating students are the main obstacle according to Vasishth. He explained that plastic straws, coffee cups, liquids and to-go food containers make up a huge portion of cross-contaminated materials.

“More recyclables are going into the trash than we would like,” Vasishth said. “The number of people who put food containers, coffee cups, bottles and cans that are not empty into the recycling is too high. So, what happens is if you have paper and a coffee cup in the recycling bin, and the coffee cup is not empty, the paper is ruined. It can’t be recycled and it has to be trashed. It’s counterintuitive.”

However, Vasishth said that he has noticed a growing interest in sustainability among students in the past year.

“Growing that culture becomes a big part of what we are trying to do,” he said. “It is about culture change more than anything else.”

To enact this culture change, a communication arts capstone class is putting together a campaign to promote the data concluded from the study and to better educate students on what waste to recycle based on the study’s findings. Senior Paul Iannelli is a part of that capstone class as well as a member of 1Step, the club helping to organize and execute the audit.

“For our capstone class, we’re doing a campaign parallel with audit, using the data and building off of it,” Iannelli said. “We just want to get the Ramapo community more sustainability-oriented and try to alter student behavior to be more sustainability prone and just let everyone know that there are easy steps you can take every day to reduce your waste output.”

The capstone is aiming for a multifaceted approach through different social media and visual showings around campus, including film screenings and panels with the directors.

“You have to kind of enforce meaning or give them a reason to partake,” he said, suggesting that getting students to care is the biggest obstacle.

“What I have discovered about doing this kind of work for decades now is that people are not all the same,” Vasishth said. “Some people will do this very readily if given the option, and for other people, it’s a heavier lift. We want to make it really easy for them to do this.”