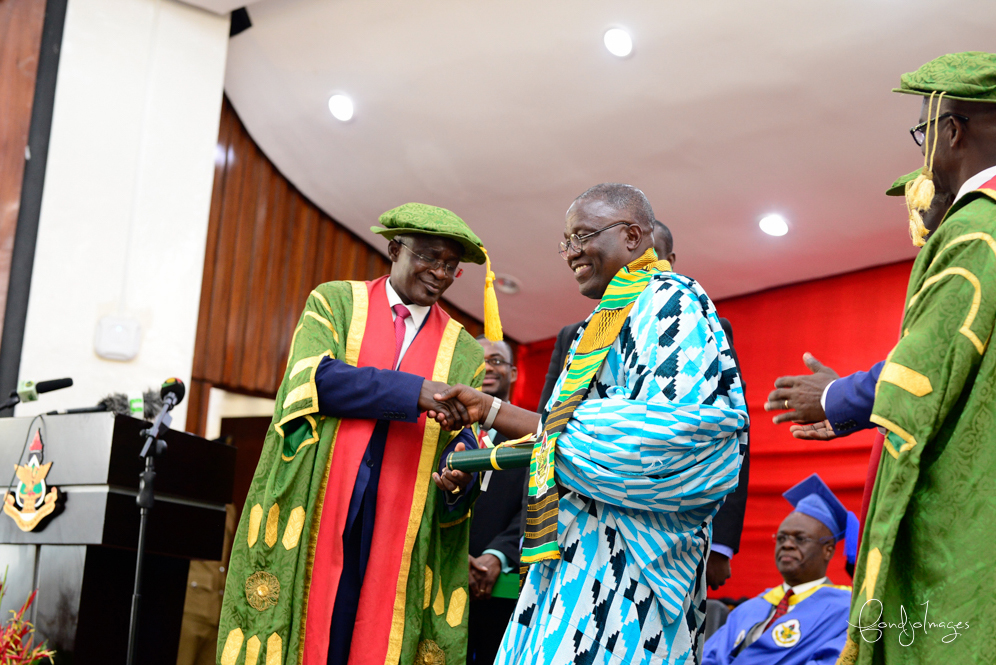 Owusu-Daaku traveled to Ghana during Ramapo’s Thanksgiving break, where he accepted the Medal for Distinguished Service at KNUST’s commencement ceremony on November 24. He was also thanked for his service as dean of students at KNUST and his work securing funds for impoverished African students through the MasterCard Foundation’s scholarship program.

Owusu-Daaku has held the position of dean of students at KNUST for 18 years, making his tenure in that role the longest in the university’s history. His award acknowledges his achievements during that time, holding him responsible for improvements in the lives of KNUST students and an innovative approach to fostering student governance at the university.

Dr. Owusu-Daaku first taught at Ramapo in 2006, becoming the first faculty member at the College to lead an anatomy and physiology course during the summer class period. The difference in classroom culture invigorated and inspired him, and he has taught at Ramapo every summer since. Currently, he is midway through a yearlong residency at the College.

“Back home, the teacher is the law and it gets a bit boring when you’ve been at it for so long,” the 61-year-old said, “The most exciting thing that keeps bringing me back is the assertiveness of American students. It’s that pushback. It energizes me and keeps me on my toes.”

The professor credits his involvement at Ramapo for his success in bringing the $20 million MasterCard Foundation scholarship grant to KNUST, and looks back on the 11 years since his first stay at the College as period of growth for himself, KNUST and Ramapo.

“A trickle turned into a waterfall,” said Owusu-Daaku, referring to the growth in contact between the two institutions over the years. Increasingly greater numbers of faculty, administrators and students travel from one school to the other each year. Ramapo President Peter Mercer visited KNUST in 2015. Last spring, Ramapo’s student government association and Ramapo Chorale, the College’s singing ensemble, toured the Ghanaian institution. According to Owusu-Daaku, an exchange will send 10 Roadrunners to Ghana later in the academic year. Ramapo will receive 11 student governors from KNUST.

Owusu-Daaku does not intend to rest on his laurels, and looks to remain connected to Ramapo far into the future.

“This place,” he said, “it has rejuvenated me.”