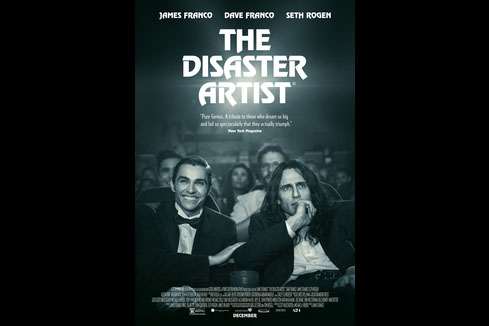 If you’re a fan of so bad it’s good films, then 2003’s “The Room” is one that you cannot miss. The movie’s bad acting, questionable dialogue and bizarre character motives make for an experience unlike any other movie. There’s a reason that limited-time screenings of it still sell out to this day, with the movie’s director Tommy Wiseau appearing alongside screenings to hang out with fans. The story of how Wiseau’s masterpiece was created is a fascinating tale that was told in co-star Greg Sestero’s book “The Disaster Artist” and was released in 2013, ten years since “The Room” debuted.

Today, the cult classic film has more fans than ever. Director and actor James Franco brings the events of the book “The Disaster Artist” to life in a film that retells the troubled production of “The Room.”

“The Disaster Artist” follows Sestero (Dave Franco) and Wiseau (James Franco) moving to Los Angeles and finding a career in Hollywood movies. They bond over their love of acting and talk about what they hope to achieve in the business. As expected of movies adapted from books, “The Disaster Artist” glosses over certain details from its source material, but the best parts remain mostly intact.

While the movie does follow the general story structure of the book closely, by the end of the film it portrays Tommy Wiseau as more of a hero than what the book describes him as.

Working with Wiseau on the set of “The Room” is described as a horrendous experience in the book, and while the movie adaption of “The Disaster Artist” depicts these awful conditions in some ways, there are certain details that are noticeably missing from the depiction of Wiseau. The book describes the man as manipulative, especially toward Sestero, making it seem like a wonder that Wiseau and Sestero are still friends all these years later; but in the film adaptation, we only see a glimpse of Wiseau’s manipulative personality.

This may be due to the wishes of Wiseau, who naturally had to sign off on the film’s creation, that he overall be depicted in a positive light, but it’s a shift from the tone that the book contained. It makes the end result of “The Disaster Artist” feel a little ham-fisted, because the validity of Sestero and Wiseau’s friendship is called into question.

Despite these flaws, watching “The Disaster Artist” is an enjoyable experience. Franco’s recreation of the bizarre tendencies exhibited by Wiseau makes for a hilarious watch, with many of the book’s funniest moments on display in the film adaptation. It’s been reported by Franco that he and the film’s crew recreated 40 percent of the scenes from “The Room” for “The Disaster Artist” and watching their recreation of those classic scenes is a fun time.

Although the movie won’t be remembered as fondly as its inspiration, it provides enough laughs and insight into what went wrong with “The Room,” that it’s a recommended watch.