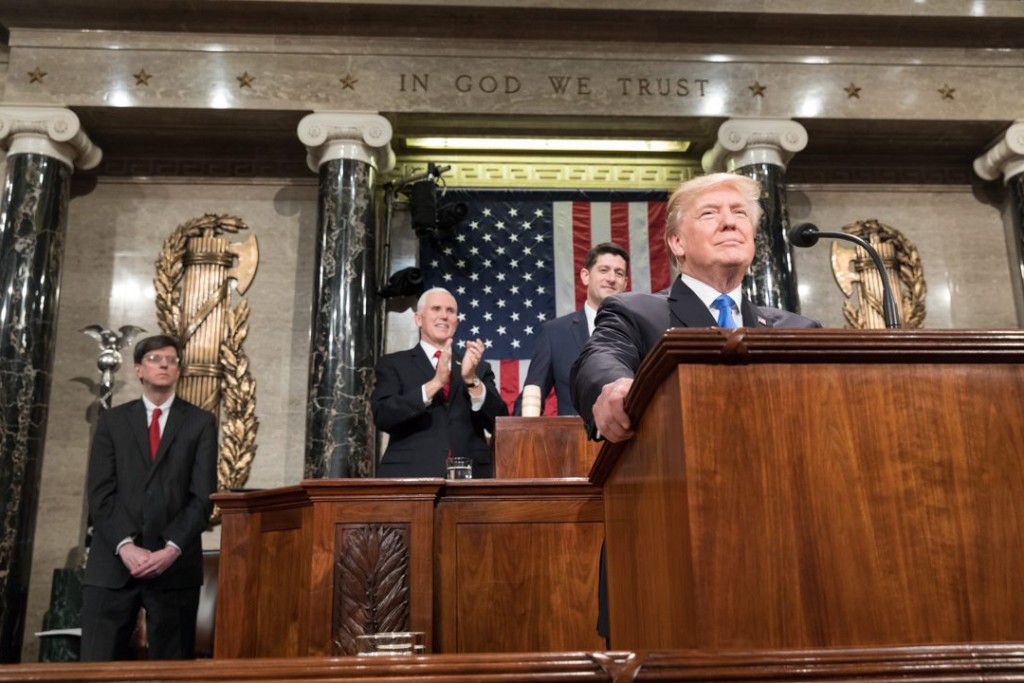 With one hand open and the other clenched high in a fist, President Donald Trump delivered his first powerful and rousing State of the Union address on Jan. 30 to a joint session of Congress, distinguished guests and millions of American viewers watching from home. Trump’s speech was like a film-reel of 2017’s greatest hits, recounting tales of American heroism, economic and legislative achievement and repeated calls for unity amongst the American people and in Congress.  It left viewers with a positive feeling in their chests and a sense of hope which many Americans may not have shared at the beginning of 2017.  He started off his speech with a call to action for United States representatives.

“Tonight, I call upon all of us to set aside our differences, to seek out common ground, and to summon the unity we need to deliver for the people we were elected to serve,” Trump said to a boisterous applause, calling on Congress for bipartisanism and to put America first.

The overarching theme of President Trump’s speech was the restored economic and political power of the American people.  The most recent legislation passed by the Trump administration has eliminated the Marriage Penalty, gifting newly-wed couples $24,000 of untaxed income in the first year of their marriage.  Small business owners can now deduct 20 percent from their annual taxes according to Trump’s Tax Cuts and Jobs Act, which will allow them to expand their business and hire more employees.  Middle class families are also cutting a huge break– under Trump’s administration, the child-tax credit has been doubled and income taxes are slashed by half.

The State of the Union is one of empowerment for all.  Probably the most poignant moment of President Trump’s speech was when he introduced his Four Pillar Immigration Plan: multiple pieces of legislation which will mend the fractured immigration system in the United States and end the dangerous “Catch and Release” immigration policy for good.  Trump’s plan brings good news for both sides of the political aisle, reinforcing his desire for bipartisanship in our country and offering a pathway to citizenship for morally upstanding Dreamers who were brought here illegally as minors.

The plan will also call for an end to the Visa lottery, a problematic system of Permanent Resident Card distribution which selects 50,000 green card candidates per year completely at random, the only criteria being the applicants are from countries with low numbers of immigrants in the previous five years.  The Visa lottery has been under heavy criticism since 2005, and Trump’s Four Pillar Plan will include replacing the lottery with a merit-based program which takes the safety of American citizens into important account, first, as well as the work and criminal history of the applicants.

President Trump’s State of the Union address serves as an olive-branch to both Democrats and Republicans to make 2018 a year of change.  His speech reminded the American people that this year has been a good one; that American citizens are being put first again, and that opportunities are blossoming all over the U.S. for Americans to achieve their dreams.