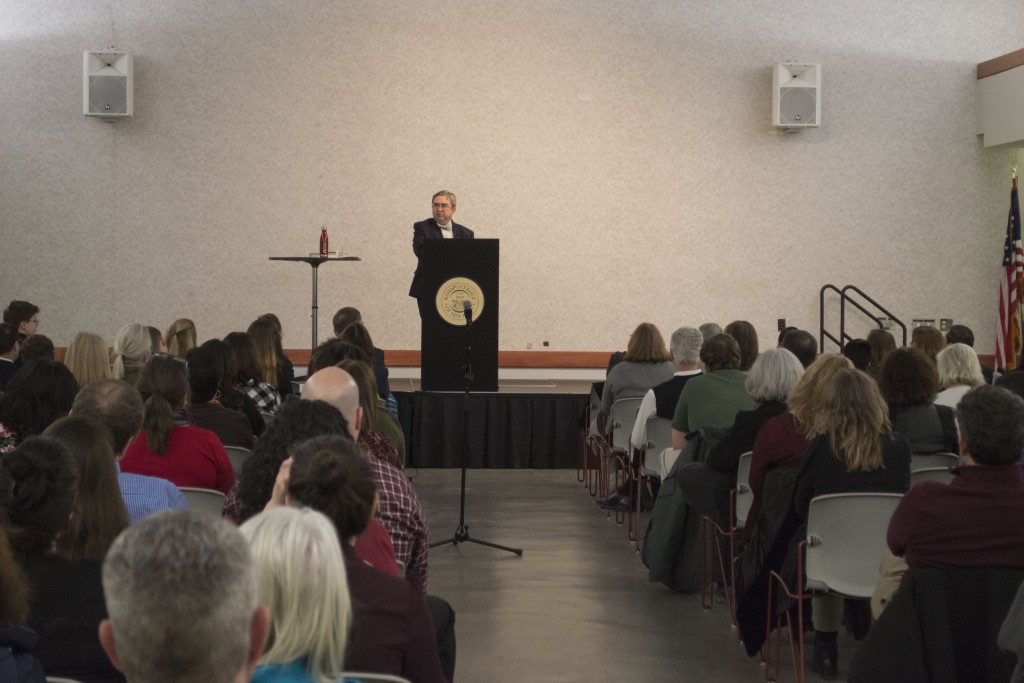 President Mercer gave his Spring State of the College Address in Friends Hall on Wednesday, detailing various ambitions and plans that he and the administration had.

Mercer strongly disagreed as expected and went on to say that while there are plenty of professions that can be attained and executed with a two-year or vocational degree, there are equally as much if not more that require at least a four-year education; a sentiment agreed upon when President Mercer met with New Jersey Governor Phil Murphy and other presidents of New Jersey’s state schools.

He went on to use the example of autonomous driving, saying that the technology for long distance driving is available and can very well minimize the need for truck drivers. He then raised the question as to why it hasn’t happened yet, where he explained, “Society has slowed this process in order to prevent a social conflict. This is a problem that a student of a vocational school would not be able to solve.”

In addition, President Mercer shared that Ramapo College has received a $1 million grant from the New Jersey Department of Health so the college can offer a program to house students recovering from drug addiction. It will be able to house up to ten students and have resources available to them on a regular basis. This is in response to the growing issues in New Jersey regarding drug abuse, with the most prevalent being opioids.

While on the subject of funding, Mercer also touched on the inadequacy of the Tuition Aid Grants (TAG) that Ramapo receives. He underlined some of the main problems he sees the school facing such as student homelessness, food insufficiency and book costs.

“It is crazy for this state to spend what it does on K-12 but have a Liberal Arts student living in her car. If the TAG Ramapo received was adequate, these problems would “evaporate” said Mercer.

What is also inadequate, according to President Mercer, is the bus service currently at campus.  He explained that he has been trying to reach an agreement with NJ Transit to get them to run buses to and from campus.

“I see a significant bias [that has] a socioeconomic tone. [It is as if NJ Transit is saying] to a kid in Paterson ‘tell your parents to buy you a car so you can go to Ramapo College’” he said

Mercer then turned his attention to new additions to the campus, starting with the search for a new Provost. He explained that the list is full of promising and diverse candidates, as the school “casted a wide net” when they were searching for preliminary candidates.

Regarding the municipality, President Mercer announced that there are talks being held about constructing a pathway from Ramapo’s campus to the Ramapo Reservation. As of right now, students who decide to run or walk to the reservation unfortunately have to do it along the side of the road, which presents a dangerous situation for the students. Mercer said it was “cruel” to make students trying to exercise have to do it along a high-speed road.

Finally, Mercer opened up the floor for questions where he was asked what the changes for the Potter Library entailed. There were also concerns about the name of the library in regard to making sure it stays labeled a library.

He explained, “There are no intentions to pervert the function of the library. [The additions] are not to renovate what is there, but to improve while also adding to the facility.”

He concluded with “It’ll have a brand-new look but won’t be functionally new.”

President Mercer anticipates the additions will be completed within the next three years.