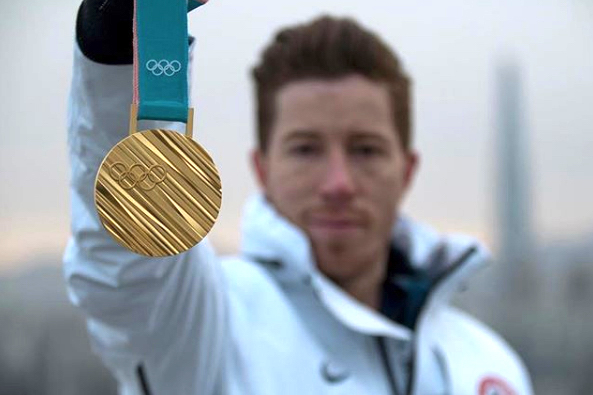 Shaun White's celebration for his record-setting, third gold medal as a professional snowboarder was cut short on Tuesday after the decorated athlete made two crucial mistakes during his post-run celebration.

White, who finished with an astounding 97.75 score in the snowboarding halfpipe, got torn into on social media after referring to sexual misconduct allegations against him as "gossip" and for dragging the American flag on the ground as he celebrated his historic milestone.

His victory lap quickly turned into an apology tour as the questions shifted from his illustrious career to the questionable decisions that he had made. He spent Wednesday morning on the "Today" show with Savannah Guthrie and Hoda Kotb in Pyeongchang apologizing for his comments.

“I’m truly sorry that I chose the word ‘gossip.’ It was a poor choice of words to describe such a sensitive subject in the world today," said White. "I was so overwhelmed with just wanting to talk about how amazing today was and share my experience, but, uh, yeah.”

He then spent the rest of the afternoon in Pyeongchang at a news conference apologizing and answering questions about allowing the flag to drag on the ground and even stepping on it at one point. During the conference, the four-time Olympian made it clear that he wasn't aware that the flag touched the ground.

“I remember being handed the flag. I was trying to put my gloves on and hold the flag and the board,” White said. “Honestly, if there was anything, I definitely didn’t mean any disrespect. The flag that’s flying on my house right now is way up there. Sorry for that. But I’m definitely proud, very proud, to be a part of Team USA and being an American and to be representing for everyone back home.”

Much of the coverage at the Olympics has avoided talking about White's past and the allegations against him. The questionable comments towards reporters questions and the dragging of the American flag have allowed reporters and various news sites to resurface them.

An article done by the New York Times details the sexual harassment allegations against White.

In 2016, Lena Zawaideh, the former drummer of Mr. White’s rock band Bad Things, filed a lawsuit against White claiming that he had sexually harassed her and tried for years to “impose a strict regime” over her, asking her to cut her hair and to wear revealing clothing and underwear.

According to the suit, Mr. White made vulgar sexual remarks to her, sent her sexually explicit images of “engorged and erect penises” and forced her to watch sexually disturbing videos. Eventually, an attorney for Zawaideh filed a notice of unconditional settlement.

These details didn't sit well for those who were fans of White, especially women.

“I have been a fan of Shaun White since his first Olympic games and I am absolutely disgusted,” said Rachael Long, a social science major at Ramapo College. “His comments disturbed me because he dismissed such awful things he did as 'gossip' and it was as if he didn't care at all until social media exploded on him.”

Some may not understand why the flag touching the ground is a big deal, but to others, it is the ultimate form of disrespect.

Despite showing remorse for his actions, people watching from their homes, especially those who served, were not particularly fond of White dragging and stepping on the flag.

"I was not happy at all when I saw that," said John Terry, a retired police sergeant of the Hawthorne Police Department. "Many people died fighting for that flag and to just be so lackadaisical with it and to step on it without knowing is ridiculous and he deserves the backlash he gets."

Despite being a decorated Olympian, White has plenty of work ahead of him going forward as he tries to repair the damage that he did to his image and himself.

While his Olympic snowboarding career may be over, White said he plans to compete in skateboarding when the sport makes its debut at the 2020 Summer Olympics in Tokyo.