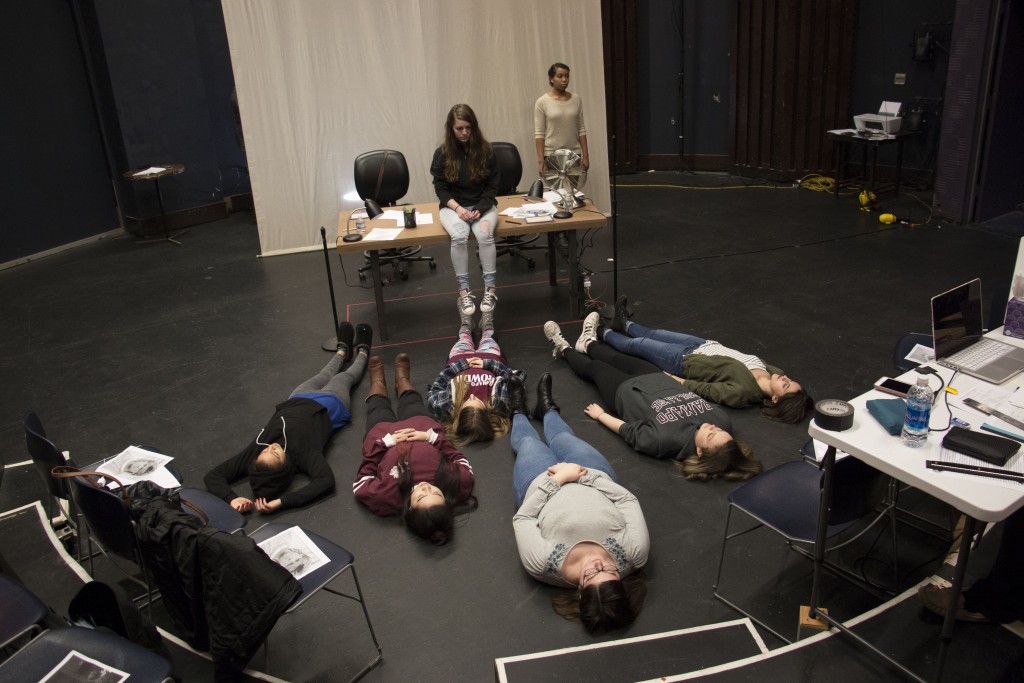 The cast and crew of “medea and medea/for medea” are prepping for opening week at the Adler Theater. Co-writer Peter Campbell, an associate professor of theatre at Ramapo, describes the play as a mash-up of contemporary and mythological stories.

Starring an all-female cast, the plot revolves around three Medeas who are characterized as women on the run. The abstract play juxtaposes elements of the Greek tragedy “Medea” with the 1991 American road film “Thelma and Louise.” Characters from the mythology and film both exemplify popular representations of female violence and revenge.

The hybrid mash-up genre speaks for many aspects of this play, because in addition to juxtaposing ancient mythology with a contemporary thriller, the play features 17th century opera and modern pop music, along with the innovative accompaniment of a live video feed. Elaborating on the story's use of nonlinear structure, Campbell said, “Instead of pushing it together and making it a unified thing, they each exist next to each other. I wanted it to be like a collage."

The play was originally written in 2011 to commemorate the 20th anniversary of “Thelma and Louise.” Campbell explained the inspiration for this type of mash-up play derived from his passion for contemporary adaptations of Greek tragedies. "To me, the value of it is, that these things ["Medea" and "Thelma and Louise"] clearly have elements that speak to each other, and the exact ways that they speak to each other are interesting and compelling, but are mostly in the eyes and ears of the spectators," said Campbell.

Discovering how those elements work together is also essential for the cast. Describing her experience playing Medea 2, sophomore Noella Gizzi said, “Finding the balance between the ‘Thelma and Louise’ plot line and what’s going on with the ‘Medea’ myth, and trying to find that connection within the same show.”

A very unique component of "medea and medea/for medea" is how the group chorus utilizes the space within the Adler. Chorus members rush behind the high risers, emerging and interacting with perched spectators.

“I think it helps break that barrier between audience and performer. It makes the audience feel like they are part of the performance,” said sophomore chorus member Jennifer Seitis. She continued, “It’s an experience for the audience rather than just a show.”

Contrasting the role of the chorus in this play with her past chorus experiences, junior chorus member Deanna Venezio concluded, “We all have to work together to make the show what it is, I think it’s a lot of teamwork and passion.”

Although Ramapo’s adaption of “medea and medea/for medea” uses the same script as the 2011 production, Venezio explained how each production is unique because of its cast. “A lot of the gestures in the show, we created ourselves through the rehearsal process. To me, that’s what theater is, a collaboration, and any piece of that just makes it unique for our cast. And this show could be unique for any cast.”