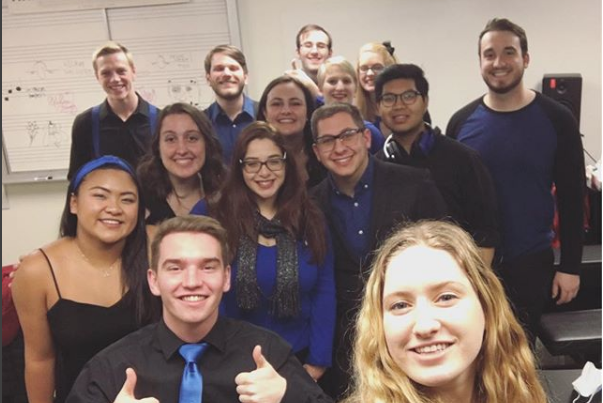 Ramapo’s a capella group 4GotteN SuitCase performed their Winter Showcase in the H-wing Auditorium on Sunday night. The multi-talented group delivered a hour long set of percussive vocal covers featuring new and throwback songs for students and relatives of all ages.

Flexing only their vocal chords, the group created dynamic harmonies capable of traveling throughout the tall space of the auditorium, unhampered by the use microphones or speakers. All of the songs performed throughout the night were arranged by student singers from within the group. To open their set, the group tackled the Red Hot Chili Peppers’ emotional ballad “Under the Bridge.”

The next two songs skated from classic rock to country pop, courtesy of “Lights” by Journey and “House Party” by Sam Hunt. The group settled into a groove during these songs, maximizing their snaps and heavy pulses, and leaning in to achieve close harmonies.

Following the first three songs, the group broke into mini groups to spotlight certain areas of vocal performance like trio singing and beatboxing. A five-person mini group mirrored Pentatonix’s performance of “White Winter Hymnal” by Fleet Foxes, matching the vocal arrangement as well as the coordinated routine of snaps and hand claps.

Amid their set list of covers, the group demonstrated an improvisation exercise coined as “Vocal Painting.” In the semi-circle, students contribute vocals and tones on cue, all on the spot and in the moment.

4GotteN SuitCase learned this exercise from the Dutch vocal group MAZE, at SingStrong, an a cappella festival in New York. During this weekend long festival, they had the opportunity to attend workshops with professional and international a cappella ensembles.

The group’s music director Jake Bookbinder said, “They have whole schools of thought around this vocal painting thing. It’s a method of live music composition done with improvisation and hand signs, like I was doing onstage.”

Explaining the key elements of cohesive improvisation Bookbinder said, “It’s listening but it’s also a lot of feeling, you’ve got to be able to see what the person next to you is doing, and find the best way to complement that, or in some cases, sing what the person next to you is singing.” He added, “It’s about feeling it out, and really just jamming, it’s really just visceral musical emotion.”

To conclude the showcase, the group ended with their concert routine from SingStrong, which was composed of the songs “Morning Comes” by Delta Rea, “Immortals” by Fall Out Boy and Avicii’s “Waiting For Love.”

In the case of this year’s setlist, the song selection told a story through themes of hope, loss and love.

“We found that these fit pretty well together. We also built the story into the choreography, but we didn’t do that tonight because we’re saving it for the big show,” said Richline.

4GotteN SuitCase usually holds regular auditions during mid-September, but they are currently in need of another alto singer. Students do not have to be music majors or know how to read music in order to audition. Their contact information can be accessed through their Weebly and Facebook pages. 4GotteN SuitCase is excitedly preparing for their final concert this semester on April 29.