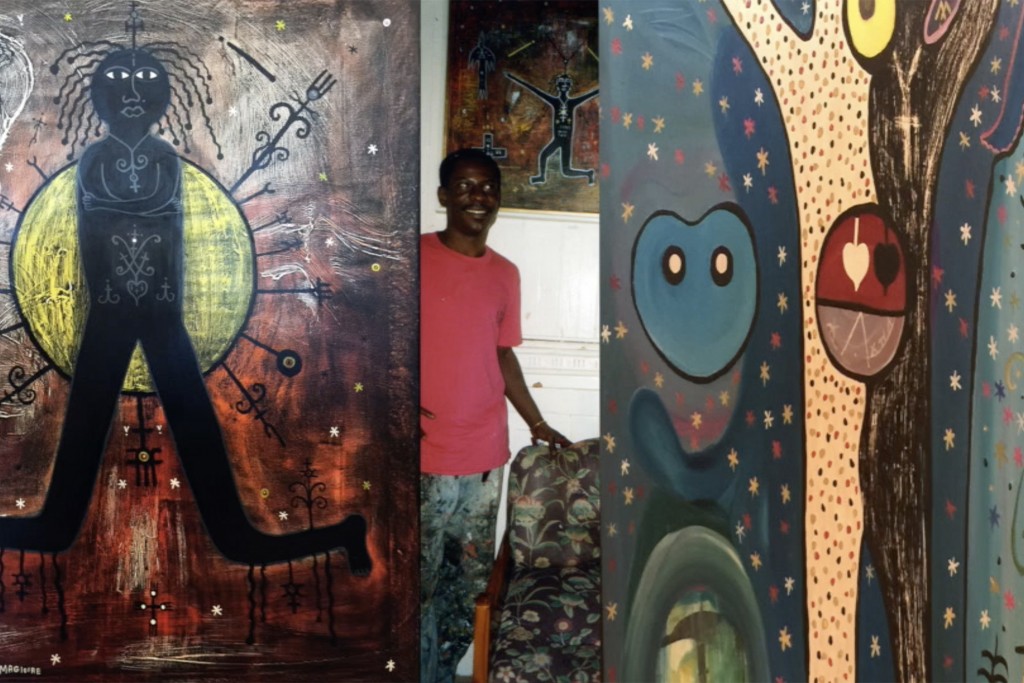 Stivenson Magliore was a prominent Haitian artist of his time, drawing notoriety and acclaim for his unique and magnificent paintings. However, in 1994, the artist died. According to the New York Times, he was stoned to death, though much of the death still remains a mystery.

Edouard Eloi, manager of the Berrie Center, and Shalom Gorewitz, professor of art and video, presented a 20 minute film last Monday honoring Magliore’s life and work, “Elegy for Stivenson.” The Culture Club, Africana Studies, and The Office of Equity and Diversity Program sponsored the event, which was part of African Ancestry month.

Elegies are poems meant to honor those who have died, which is precisely what Eloi and Gorewitz’s film did. The film opened by panning over some of Magliore’s beautiful paintings, the vibrant colors lighting up the room. As Magliore’s work flashed over the screen, Rachel Hadas read poetry in the background.

“Art trumps death, life trumps art’ was the quote that really stuck out to me,” said senior Wesley May. “It’s hard to have life without the experience and through the experience is life.”

In addition to the glorious artwork, the film featured original footage of Stivenson and his mother, Louisianne Saint Fleurant, as well as interviews with Maria Isabel Moreno Magda Magloire, Richard Morse, Jacques Pierre and Pascal Monnin. Gorewitz explained that “everyone has a version of how Stivenson was killed.” The purpose of the film, however, was not to figure out the circumstances surrounding Magliore’s death, but rather to “pay homage” to the talented artist, according to Gorewitz.

“Had a completely unique style,” said Gorewitz. “When you see someone with that kind of talent and sense of freedom is remarkable.”

Eloi explained that while some people refer to Magliore’s style as “primative” it is actually “self-taught art.” The film explained that he began art at a young age, and in doing so developed his own unusual and stunning style.

“I enjoyed the artistic display that was represented within the film,” said senior Andona Pepic. “It was a pleasure to have participated.”

The film explained that, embedded into his work, was symbolism for his religious, ideological and political beliefs, and that he was active in fighting racism and injustice. It is most likely because of his activism that he died, however.

“I think he was killed because of his art,” said Gorewitz.

Eloi explained that Haiti “plays a very integral part in the western hemisphere” in terms of abolishing slavery because once a slave would come to Haitian land, they were free from slavery. He said that these themes, as well as themes of voodooism, were prevalent in his work.

Haiti and Haitian art plays a major role at Ramapo College. Eloi explained that the college’s haitian art collection is larger than that of any public institution in the United States.

“I am so proud to belong to this institution that has the largest haitian art exhibit,” said Eloi.

Gorewitz also noted that Sydney Jenkins as Director of Ramapo College Galleries plays an integral role in maintaining this collection.

While the end of February might also mean the end of African Ancestry month, there are ample opportunities throughout the year to celebrate African culture. Whether it be visiting Ramapo’s Haitian art exhibit or learning more about the mastermind that was Stivenson, students could greatly benefit from expanding their knowledge on Haiti and its rich culture and history.

Students who were unable to attend the film viewing can do so at https://www.contemplatingcolor.com.